by Alia Hoyt Oct 23, 2017
Weddings have been getting a lot smaller these days but not only to save on money. Kristine Foley/Getty Images

Back in May, digital marketing specialist Katie Biggs married her husband in New York City. Their ceremony was held at City Hall, followed by vegan dim sum in Chinatown. The event was capped off with a champagne toast at their apartment that evening. From start to finish, their wedding day was attended by a total of 25 people, only family and very close friends.

Biggs is part of a growing trend: the microwedding. Lavish nuptials have long been the standard, at least for people who could afford the significant expense. But, many couples are now opting instead for a more intimate experience — sometimes to save money, other times to make the wedding experience more meaningful. The Knot notes in its 2016 survey that the average number of wedding guests is now 141, down from 149 in 2009.

"I think couples are going this route because they want to make their wedding experience personal to their relationship and not worry about all the traditions of a wedding that they don't want," says microwedding and elopement coordinator Tracy Brisson with Savannah Custom Weddings & Elopements. So far for 2017, she says 107 couples have chosen microwedding packages — about a third of all the company's weddings. In 2016, 88 couples chose microwedding packages, or 23 percent.

What a Microwedding Isn't

So what exactly is a microwedding? First off, it's not an elopement, because it's not a secret. There's usually some planning involved, but far less than for a traditional wedding. There's also no definitive number of guests. Some wedding planners put it at less than 50, others at less than 10 guests. "[It's] the fewest you can get away with having," explains global trends expert Daniel Levine in an email. "They are the result of a conscious decision to exclude guests who you would have invited to a 'regular' wedding ... The microwedding trend is rising, and will continue to grow over the next decade."

There's also often an absence of tradition, which differentiates microweddings from a typical small wedding of the past. So, there might not be a church, a decorated hall or a reception area with lots of fresh flowers. "Most people buy a ton of flowers, hire a wedding planner and a popular band because it's tradition. They assume it's expected," says Shelley Grieshop, writer with Totally Promotional, a company that makes wedding favors and other items.

However, microweddings aren't necessarily about being understated or thrifty. Sometimes, couples go all out for a smaller number of guests. "I find that couples like to take advantage of the money saved to create a wedding weekend for their guests. The majority of my clients are planning destination weddings, so they use the savings to extend the festivities and keep family and friends entertained throughout their stay," emails Emily Sullivan of Intimate Weddings by Emily Sullivan, which focuses on nuptials with a lower guest count. "We're seeing everything from crawfish boil welcome parties to brunch at five-star restaurants."

So, who is most likely to take advantage of this trend? Southwest Florida wedding planner Jenifer Gay, with Blue Flamingo Weddings, says her most common microwedding couple is an older pair who were previously married. "They have no interest in spending their hard-earned money on a big wedding, nor do they feel the need to impress anyone," she says by email.

Millennials are also big into this trend. Since they're marrying at older ages than previous generations, they're often paying for all or most of the wedding themselves, notes Flora Ellis with Unveil Events. "Because of this, couples really care about value and the experience of their wedding day," she emails.

Just don't be surprised if some people get their noses out of joint when they don't make the guest list. There are bound to be hurt feelings, so Emily Sullivan recommends that couples head it off at the pass by being vocal about their plans. "I suggest to my clients that they need to set expectations with family and friends ahead of time. This can be a tough but necessary conversation."

As for who to invite to your microwedding, Sullivan says to think of it this way: "If you were going to have a dinner party at your house, who would you invite? Those are the people that need to be with you on your wedding day," she says.

Now That's Crazy
Many New Yorkers are going micro — and no wonder. Manhattan is the most expensive place in the U.S. to get married, with the average wedding hefting a price tag of more than $78,000. 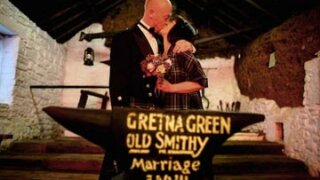 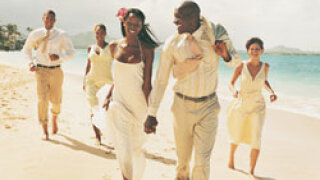 10 Tips for Planning a Destination Wedding 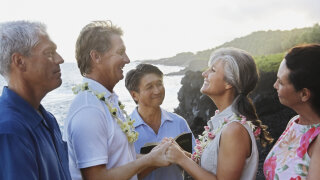