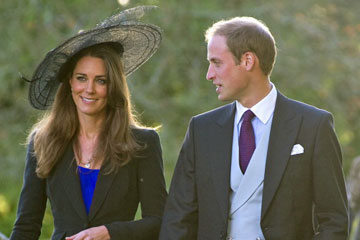 Image Gallery: Princess Brides Now, they're a power couple. But once upon a time, Kate and Will were just two nervous college students. See more pictures of princess brides.
Indigo/Getty Images

When Prince Charles married Lady Diana in 1981, it confirmed what everyone had long suspected: The royal dating pool was as limited as ever.

Sure, a young lady from a common background could attract royal attention, but any prospective future queen would have to come from a royal bloodline. A generation later, however, Charles and Diana's eldest son, William, upended that prudish tradition when he proposed to his longtime girlfriend, Kate Middleton.

Middleton is beautiful, glamorous and not at all royal. Her parents founded a party supply company that has made them millionaires, so she's no stranger to privilege. Yet, detractors still claim that the opulence of the Windsor clan is above her station, and the press hasn't always been kind toward Kate.

Criticism of her family's background has been printed in everything from tabloid rags to respected papers. Kate's sense of style has turned her into a fashion icon thanks in large part to the paparazzi, but the couple's prolonged courtship also earned her the nickname "Waity Katie."

But Kate's not waiting anymore. In fact, barring any unforeseen circumstances, she'll one day be queen of England -- common background or not. To celebrate the couple's royal nuptials, we thought it'd be a good idea to bring you up speed on the origins of their long-term romance. We'll dish the details on when, where and how they met and reveal what keeps them together. (Hint: It isn't their shared value of public poise.) 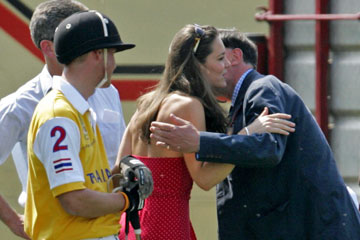 Kate and Wills (as he's sometimes called by the press) met while they were both attending the University of St. Andrews in Scotland. According to one royal biographer, the prince was smitten with Middleton from his very first glance. Upon being introduced, Middleton gave the prince a curtsy -- it's customary to bow or curtsy before royalty in England -- and he responded by spilling his drink all over himself. Kate claims their first meeting was brief. She said, "I actually think I went bright red … and sort of scuttled off, feeling very shy." Luckily for William, Kate's bashfulness was only temporary, and before long, the two had become good friends.

But even though they were just friends, there was obviously an attraction. William paid close to $350 for a front-row seat to see Middleton modeling lingerie at a charity fashion event, and that seems like a pretty high price to pay to see a pal walk around in skivvies -- even for a prince. Still, the two grew closer but remained platonic for over a year, and they even shared space in a flat together with some additional friends. As William and Kate spent more time around each other in such close quarters, their relationship changed, and in 2002, they began dating.

As anyone who's seen a supermarket tabloid in the last eight years can tell you, Prince William and "Waity Katie" had their share of ups and downs. In 2007, they broke up for a few months, and they dated for seven years before he finally popped the question.

So, what got them through it all? According to William, "Being friends with one another is a massive advantage." He believes that their friendship set "a good foundation," and we have to agree. Eight years is a long time to wait, but in Kate and Wills' case, it allowed them to build a relationship strong enough to endure the rigors of royal life -- and that's worth having to endure a tabloid nickname or two.