Red Lips and Glamour: Secrets of the '50s Makeup Look 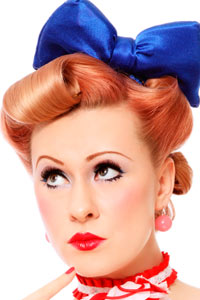 The pinup look of the 1950s is popular once again.
©iStockphoto.com/Thinkstock

Eisenhower's in office. There are two cars in the average family garage. Alaska and Hawaii both become states. Movies are shown in Technicolor. And kissable lipstick is first made available to American women. All of these things make up the decade of the '50s.

When you think about cultivating a retro look, there's just something special about 1950s style. It's feminine. And it's glamorous. Considering her style icon status of today, it's hard to imagine Audrey Hepburn once commenting, "I never thought I'd land in pictures with a face like mine" [source: The Daily Mail]. But she and other screen beauties such as Marilyn Monroe, Grace Kelly, Elizabeth Taylor, Sophia Loren -- and don't forget the pin-up look of Bettie Page -- are where we often look to for '50s makeup inspiration.

Hollywood had a significant impact on makeup during the 1950s -- influencing both makeup trends and the cosmetic industry. Women wanted the unblemished, beautiful skin of on-screen starlets (which looked even more beautiful now that they were being shown in glorious Technicolor).

Makeup for most housewives tended to be very feminine in the '50s, with soft pink tones and defined eyes and brows. When Hollywood began to influence the mainstream, the most-wanted makeup styles included Marilyn Monroe's pale skin and red lips, and Elizabeth Taylor's lined eyes and crimson lips. Eye liner was applied beyond the corner of the eye (ending the line with a little flick for an upward finish) and mascara only to the top lashes. Brows were strong, with a pointy arch. To achieve that unblemished starlet look, women borrowed from Hollywood. Max Factor began selling pancake makeup -- once reserved for actors -- to American housewives, allowing any woman to cover or improve the look of any skin imperfections. Pancake also gave a woman's skin the desired flawless, matte finish of the day.

If "grease" is your word and you want a more rockabilly '50s look, you really only need two tools for the job: black liquid eyeliner to sculpt the perfect cat eye, and red lipstick for the perfect pout. False eyelashes and a flawless complexion (break out the pancake makeup) round out the style.