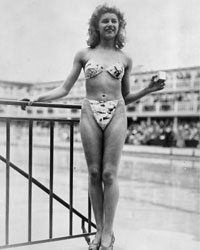 Nude dancer Micheline Bernardini was the only woman willing to model the scandalous new bikini in Paris in 1946.
Keystone/Getty Images

Whether French models at this time were quite as, um, free-spirited as their reputation implies is unclear, but the fact that they refused to model the invention of the decade says a lot. It was, in the fashion and morality worlds, on the level of the atomic bomb testing at Bikini Atoll for which it's named.

The bikini stunned the world in 1946 by the simple, scandalous fact that it revealed the navel -- the taboo zone beneath the belly button that no decent girl would show in public.

Two designers came up with it simultaneously, and it made its debut on the beaches of Cannes during the 1946 film festival and on a Paris runway, where it was modeled by a stripper.

The bikini trickled onto beaches and pool decks in Europe over the following years, but in the United States it provoked mostly a collective "I never!" for some time to come. As the '50s came around, women in America actually took a step in the opposite direction …