Is my fragrance making me fat? 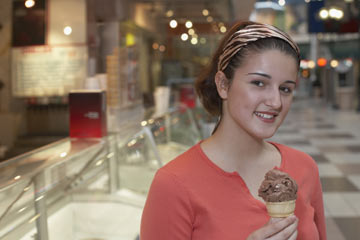 Could your perfume be more fattening than chocolate ice cream?
Jack Hollingsworth/Photodisc/Thinkstock

You've scaled back on sweets, cut your portion sizes, and sweated through daily spinning classes at the gym, but you still can't squeeze into your skinny jeans. Maybe it's time to consider if your fragrance is playing a role in helping you pack on the pounds. While research on the relationship between fragrance and body weight is still in the early stages, recent studies suggest that there just might be a link between the scents you wear and the number on your scale.

In January of 2012, researchers at New York's Mount Sinai Medical Center found that children with higher levels of phthalates in their urine also tended to have a higher waist circumference than children with a lower concentration of phthalates. A separate study released a few months later found a similar relationship between phthalates and obesity in the elderly. Phthalates, a type of chemical used to delay fragrance and extend its life, are found in a majority of cosmetic products, including perfume and other fragrances, as well as deodorant and hair products. Even worse, trying to avoid these chemicals can be tricky because manufacturers often lump them in under the term "fragrance."

While more research is needed to understand the relationship between phthalates and weight, particularly in populations other than children and the elderly, some studies suggest that the type of scent you choose may have more of an impact on your weight than the ingredients it contains. For example, consider perfumes and lotions in mouth-watering fragrances like chocolate, vanilla or strawberry. A 2011 study published in the journal "Food Quality and Preference" found that these sweet scents might increase your appetite. Surprisingly, it's not simply the scent itself that makes you eat more; instead, it's the combination of the sweet fragrance and the knowledge that this scent is typically associated with food that might cause you to indulge more than you would normally. In fact when the lotion was not labeled as, "chocolate," test subjects did not eat extra chocolate-chip cookies, as they did when it was.

So what's a fragrance-loving lady to do? Before you swear off perfumes in an effort to keep your weight in check, consider this: Just as scientists have found a link between certain scents and weight gain, other research also suggests that some fragrances can actually help keep your weight in check. A 2005 study at Osaka University in Japan revealed that the smell of grapefruit oil helps to suppress the appetite and reduce body weight. Be warned, however, that the same team of researchers found that lavender oil produced exactly the opposite effect.

Of course, there's always Prends-Moi. In 2012, French perfume maker Robertet released a new scent called Prends-Moi, or "Take Me," for non-francophones. The new scent has been touted as the world's first weight-loss perfume, and promises to boost your sense of pleasure, stop you from snacking and even break down fat. In a trial study, 75 percent of participants claimed that the perfume felt it limited their need to snack. How does it work? While it does include some grapefruit top notes, the makers of the perfume credit ingredients like Betaphroline, which naturally boosts feelings of well-being. Betaphroline is a neurocosmetic, which means it works thanks to the power of suggestion. That is, the perfume causes you to eat less and feel a greater sense of well-being simply because you believe it will.

If you're one of the more than 6,000 women on the waiting list for this perfume, take heart; Prends-Moi also contains caffeine, spirulina and other ingredients that have been proven to fight cellulite and smooth skin. This means that even if your perfume doesn't actually make you lose weight, it may still help to improve your appearance in other ways.

Why are scents attributed to a specific gender?
'Man Bun' Alert! Hair Club for Men Could Be Next
Concealers are a Girl's Best Friend