How much does it cost to be a stay-at-home mom? 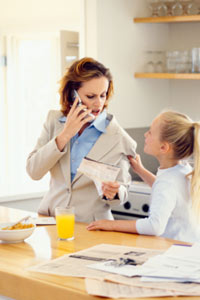 Image Gallery: Parenting Is working worth it? Take time to crunch your numbers. See pictures of parenting.
Goodshoot/Thinkstock

In 2009, almost a million more American families with a child under the age of 6 included a dad who worked and a mom who stayed at home than in 1986. That's a big number, but percentage-wise the rate of married couples with children that include a stay-at-home mom actually declined between 1986 and 2009, from 44 to 37 percent.

The advent of power moms, those women who pour as much drive into their families as childless women put into their careers, have made stay-at-home moms much more visible. Power moms are celebrated in advertising. They've also shown they're capable of launching social media campaigns against companies that miss the mark. Power moms are fashioning themselves as the new standard for motherhood. The reality is, however, that more mothers are opting to maintain both careers and families than are opting to stay at home.

Certainly, one reason for these figures is the abundance of choices afforded to modern women. Working mothers benefit more from flexible schedules and hours in the workplace, to be sure. But another reason that more families don't include a stay-at-home mother is because it's simply too expensive. A 2009 survey conducted by the human resources firm Adecco found that 80 percent of working mothers said they worked because they had to.

The result of giving up income in favor of raising kids is what has come to be known as the "mommy tax". The most prominent figure bandied about for the total loss of income that constitutes this so-called tax is $1 million. But what are the factors that add into this mind-boggling number, and is it really that big?