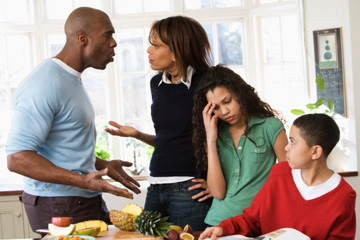 All families have their arguments and squabbles, but here we'll look at how family fights impact kids.
Banana Stock/Thinkstock

All families have their fair share of arguments. Squabbles over who was supposed to unload the dishwasher or take out the trash are pretty common in all families. It's when the arguments start to get heated or frequent where troubles start to brew.

Not all kids suffer from negative effects of family fighting, but ongoing or intensifying arguments may have lasting impacts on the physical and mental health of kids -- effects that reach beyond race, social or economic status.

Here we'll look at how family arguments impact kids, from models of conflict resolution to how stress effects children.

It can be okay for parents to fall into a disagreement in front of their kids -- who are we kidding, this isn't a perfect world. When they do happen, family arguments can be an opportunity to show your kids how to communicate. You can be the role model by putting your constructive rather than destructive argument skills on display.

The art of arguing includes staying calm, being respectful, dealing with the problem and completing the argument, even if it means taking some time away (time out for parents). When you do argue in front of the kids, be sure to apologize and make up in front of them too.

The stress brought on by family arguments can lead to emotional turmoil for everyone involved. Kids' minds may focus more on the arguments at home and whether or not their family will remain intact rather than on what's going on in social studies.

Coinciding with the level of at-home arguing, some kids begin to show cognitive problems including slower cognitive functioning and limited problem-solving skills.

Some food for thought: In a study done with third, fourth and fifth graders by the National Bureau of Economic Research, children from troubled families displayed lower tests scores in reading and math and had higher levels of disciplinary problems.

When disputes are common at home, whether it's parent to parent, between parents and kids or a combination of everyone, children often bear the brunt of the wounds.

Ongoing verbal fights that escalate to contemptuous and belittling (not just yelling, but name calling, bullying and cursing) put kids at an increased risk for social and psychological problems, including anxiety, depression, aggression, lower self-esteem and trouble interacting with their peers. Mix in physical violence and the risk for a kid developing long-term physical (on the cardiovascular, endocrine, and immune systems) and/or mental health problems rises.