5 Things You Need to Know: Bonding With Grandparents 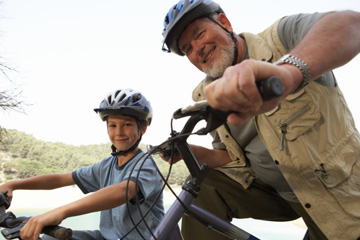 Near or far, kids and grandparents can stay connected and involved in each other's lives.
TLC

While many kids' grandparents live far away, others' reside right around the corner and or just a few doors down the hall. Whether children get to see their grandparents on a regular basis or only during infrequent visits, there are lots of ways for them to stay connected and involved in each other's lives.

It's interesting to note, grandparents are increasingly finding themselves called upon to help care for their grandchildren, whether as a primary or part-time caregiver. And while that can be a good thing, it can also be challenging. According to the AARP, as of the 2000 U.S. Census, about 5.8 million grandparents lived in homes with their (under 18) grandchildren -- in the case of approximately 2.4 million of those grandparents, they were the heads of the household and the ones principally responsible for raising their grandkids.

Keeping these statistics in mind, let's take a closer look at grandchildren and parents bonding with grandparents.