5 Best Movies About Being a Mom

Browse the article 5 Best Movies About Being a Mom 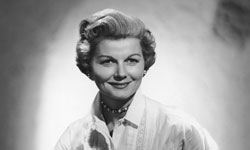 No offence to June Cleaver, but '50s portrayals of motherhood are not, how shall we say, spot-on. In addition to being rewarding, exciting, heart-expanding and life-changing, motherhood is also rife with exhaustion, frustration, worry and, early on, poop. Lots of poop.

Luckily, Hollywood has caught on: Moms want a fair-sized dose of reality in their mommy-related media.

Here, five of the best movies for those looking for poignant, conflict-filled and often funny stories about being a real mom. We'll start with one that does "poignant" and "conflict" with utter mastery … 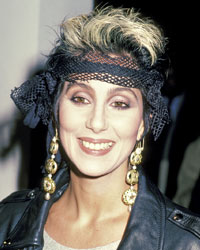 What's the matter, never seen anyone from the planet Vulcan before?

It's the story of a biker mom (Cher) whose son (Eric Stoltz) has a severe facial deformity. The plot takes us through both of their struggles to cope with the challenges that go along with being different, and loving a child who is different, in an often-cruel world.

It won awards at both Cannes and the Oscars in 1986 and is well worth a watch for those in the mood for motherhood-related triumph, tragedy and perspective.

Up next, a mom movie that was ahead of its time … 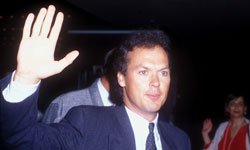 My brain is like oatmeal. I yelled at Kenny today for coloring outside the lines! Megan and I are starting to watch the same TV shows, and I'm liking them! I'm losing it.

Who doesn't love a good role-reversal flick? It challenges stereotypes, shifts the paradigm and offers a new perspective on an old theme.

In the case of 1983's "Mr. Mom," that theme is motherhood -- in all its comedic glory. Michael Keaton is fantastic as a stay-at-home dad before there was such a thing, and his adventures in motherhood are straight-up funny. Teri Garr is his working wife, and Martin Mull is her villain boss.

Up next: It's a little tragic, totally heart-tugging, perhaps too close too home and, thankfully, a whole lot funny … 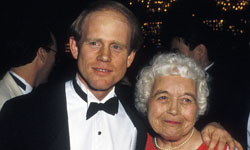 No, no, no, no. I'm too young to be a grandmother. Grandmothers are old. They bake, and they sew, and they tell you stories about the Depression. I was at Woodstock, for Christ's sake! I peed in a field! I hung on to The Who's helicopter as it flew away!

This one has it all, as far as parenting goes: troubled kids (old and young), single mom, married mom, separated mom, job stress, mom stress, family dinners, last-minute birthday-party rescue and all the other stuff that comes along with having kids.

"Parenthood" (1989) was directed by Ron Howard and stars the impressive likes of Steve Martin, Mary Steenburgen, Diane Wiest, Jason Robards and Joaquin Phoenix. It's a must-see if you're looking for a mom movie that does every mom emotion -- and does it well.

Up next: Leaving the '80s for a moment, a movie about modern motherhood … 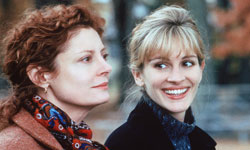 Mom, I'll hate her if you want me to.

It's easy to find movies about evil stepmothers. Far rarer is a realistic (and still entertaining) treatment of the modern "other mom" situation, which often proves problematic.

In this 1998 film, Ed Harris is dad, Susan Sarandon is mom and Julia Roberts is in the awkward position of stepmom to two kids. It's full of conflict and truth and some very poignant moments as the family works through this common post-divorce, modern family makeup. 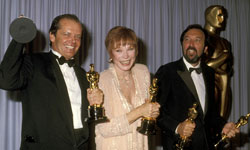 An Oscar winner, a classic, a quality chick-flick and a huge moneymaker for Kleenex, "Terms of Endearment" (1983) pairs mom Shirley MacLain (whose sort-of boyfriend is Jack Nicholson) with daughter Debra Winger to make a film you will not make it through without crying.

Nay, weeping. And laughing, too.

The story is beautiful and complex, the acting is great and the dialogue is masterful. "Terms of Endearment" is a motherhood movie for the ages.

Watch it with your daughter -- if she's old enough. This is not June Cleaver stuff.

For more information on moms, motherhood and great portrayals in film, look over the links on the next page.