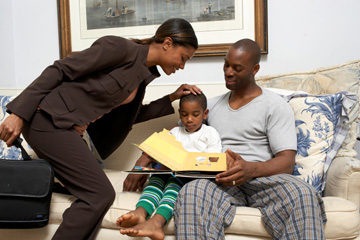 Despite sweeping shifts in gender roles over the past few decades, first and second wave feminists continue to scrutinize the woman's role in society. Is it as a mother, at home with the kids? Is it as a career-oriented trailblazer, eschewing the concept of family and making as much -- no, more -- of a mark on the world than her male counterparts? Is it each woman's choice?

What has emerged is the idea that a woman's character is described not by whether a woman raises a family, chooses a career or both, but by the drive they have toward whatever they decide to do. And a new term has been coined that accurately captures this idea: power mom. It also describes the power women wield in the 21st century. Media research company Nielsen shows that American moms represent $2 trillion in spending to U.S. markets. A 2008 survey by the Families and Work Institute showed that 21 percent more working mothers under age 29 said they wanted more responsibility at work than in 2002. For those power moms looking for a career revival, starting from scratch or switching jobs, we've compiled a list of 10 career choices, based on accessibility, flexibility of schedule and average income.