What is elimination communication? 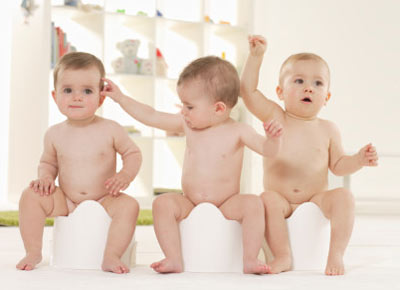 About half of the world's children never wear diapers -- and they're toilet-trained by the time they're a year old. See more parenting pictures.
Eric Pearle/Taxi/Getty Images

Expectant parents are faced with a huge amount of decisions. Breast-feeding or formula? Babysitter or day care? And then there's the diaper conundrum. For many, it's tough to decide between the two basic choices -- disposable and cloth. Most Americans use disposables, but you could think of it as coming down to this: Would you rather wash stinky cloth diapers for two (or more) years -- or be personally responsible for a portion of the 22 billion disposable diapers that clog American landfills each year? [source: New York Times].

But there's a third option you might not have heard about -- a growing movement of parents is singing the praises of not using diapers at all. That's right. Advocates of elimination communication (also known as infant potty training, natural infant hygiene and "potty whispering") say that you can start training your baby to use the toilet almost from birth.

The idea of leaving your child bare-bottomed might sound strange, even horrifying, to American ears, but it's not a new concept at all. In fact, about half of the world's children -- mostly in Asia and Africa -- never wear diapers and are fully toilet-trained by the time they're a year old [source: Contemporary Pediatrics]. In China, for example, children wear special split-bottom pants, so when a parent sees that her child needs to "go," she can immediately take him to an appropriate spot. This kind of public toilet training probably wouldn't fly in the United States, but elimination communication practitioners also rely on their children's body language, timing and verbal cues.

Parents turn to elimination communication for a number of reasons. It's obviously a more environmentally friendly -- and cheaper -- choice than diapers. Advocates also claim that babies are more comfortable without diapers (no diaper rash) and that being attuned to their child's needs creates a higher level of bonding. According to Laurie Boucke, who has written two books on the subject, children are usually "toilet-independent" by 2 years old with elimination communication [source: Infant Potty Training]. Traditional toilet training doesn't even start until an average age of 3 [source: Contemporary Pediatrics].

So, how do you go about training a 3-month-old baby to use the toilet? Do you have to hover around your child 24 hours a day to prevent accidents? And what happens when you're stuck in traffic and your diaperless infant needs to "go"? 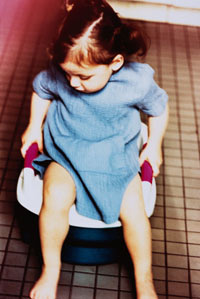 If you use elimination communication, advocates say, your child will be done potty training well before she reaches this age.
Lisa Pines/Photonica/Getty Images

If you want to try elimination communication, the key is learning your baby's body language, and you can get started with this right from birth. Infants might not be able to tell you verbally that they have to go to the bathroom, but they do give signals. Your baby might grunt when he needs to defecate or squirm when he's about to urinate. Your job, in a nutshell, is to read these signals and then hold him over a toilet.

The other key factors are:

Timing: It's fairly easy to figure out your baby's elimination schedule. Most babies go at pretty regular intervals during the day, and a certain number of minutes after waking up or eating. Many practitioners say that after a while, they can just "feel" when their child needs to go [source: Natural Wisdom].

Verbal cues: This is where the "communication" part comes in. The baby communicates her need to you, and then you communicate a special sound to her (usually an "ssss" or "shhh" sound) as she's using the toilet. Soon the baby will realize the connection between the sound and the experience.

Experts say it's best to start infant potty training before the baby is 6 months old. After that, it's still possible, but the child will be used to wearing diapers and will have a harder time learning new habits. Laurie Boucke claims that most children have "reasonable control" by 12 to 18 months and that training is usually done by 24 months [source: Infant Potty Training].

And no, your child doesn't have to be diaper-free at all times -- you won't jeopardize your success if you put her in a diaper overnight or on a long car trip. And things will proceed faster if one parent or caregiver is able to work with the baby all the time. But you can still succeed with elimination communication even if you work full-time and your baby is diapered at day care.

What do doctors and traditional potty training experts think about elimination communication? We'll find out on the next page.

In the past few years, more and more parents have been teaching sign language to their preverbal children. According to BabySigns.com, which is accredited by the National Institutes of Health, signing helps babies communicate (which reduces their frustration and possible tantrums) and speeds up their psychological and verbal development -- all of which would obviously come in handy when attempting elimination communication [source: Baby Signs].

The Bottom Line on Elimination Communication 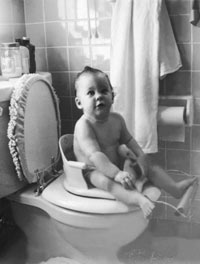 Today, most children start toilet training at around 18 months, but it used to begin much earlier.
Altrendo Images/Getty Images

The American Academy of Pediatrics says that babies can't fully control bladder or bowel movements until they're about 18 months old. So, the ideal age to begin toilet training is around then -- but it's important for children to be ready for it, and every child is different. The child must be able to understand what the toilet is, verbally communicate her needs and physically get herself to the toilet. Otherwise, there's just too much stress on parent and child -- and too much opportunity for failure [source: AAP].

The infant potty training community, of course, begs to differ. Babies aren't uncommunicative blobs, they say, and they have more control over bodily functions than the medical establishment thinks.

Although the sides disagree on what age is best, they both recognize that the current trend toward later potty training is not a positive one. The age of toilet training initiation steadily increased through the 20th century, largely because it's so easy to use disposable diapers. Now, the average age is around 3 [source: Contemporary Pediatrics], even though the AAP recommends about 18 months. Dr. Barton D. Schmitt, writing for Contemporary Pediatrics magazine, asked, "Has the pendulum swung too far?"

Toilet training methods have changed quite a bit in the past century, too. In the early 1900s it was a fairly strict, punishment-based process. But the psychiatric community, led by Sigmund Freud, started questioning the psychological impact of using punitive techniques in toilet training. Now, parents are encouraged to make it fun for the child, staying positive and offering rewards for using the toilet.

Obviously, parents need to consider many factors when thinking about trying elimination communication. It takes a lot of time and patience, to be sure, but more time and patience than changing diapers for three years? Only you can be the judge.

To learn more about elimination communication and infant potty training, take a look at the links on the next page.

In the past few years, more and more parents have been teaching sign language to their preverbal children. According to BabySigns.com, which is accredited by the National Institutes of Health, signing helps babies communicate (which reduces their frustration and possible tantrums) and speeds up their psychological and verbal development -- all of which would obviously come in handy when attempting elimination communication [source: Baby Signs].

5 Strategies for Helping Tweens Cope with Bullying
What if your teens don't trust their parents?
5 Amazing Surrogacy Stories