by Danielle Fisher
Prev NEXT
6 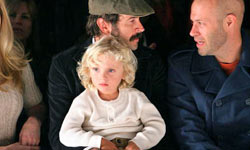 Hopefully his adorable looks will help Pilot Inspektor Riesgraf-Lee, seen here with his dad, actor Jason Lee, get through the tough years of what we can only imagine he might endure with a name like that.
Michael Buckner/Getty Images

"My Name is Earl" star, Jason Lee and "Leverage" star Beth Riesgraf named their son Pilot Inspektor. The couple took inspiration from a song by indie rockers, Grandaddy, titled "He's Simple, He's Dumb, He's The Pilot." Despite the seemingly negative and discouraging words in the title, the lyrics of the song are a bit more inspiring, ending on an up note with the advice, "don't give in." Perhaps the couple hoped the name they gave their son would help him be tough and not give in to the evils of Hollywood. The couple, however, gives no explanation for the middle name, Inspektor, or its odd spelling.