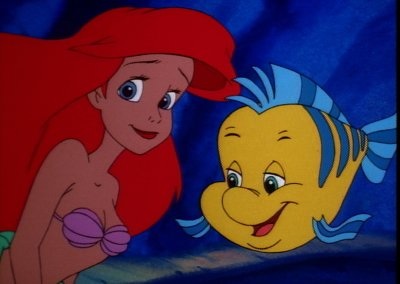 Ariel -- the red-haired, fun-loving mermaid and youngest teen daughter of King Triton -- is enchanted by all things human. Disregarding her father's order to stay away from the human world, she swims to the surface and, in a raging storm, rescues Eric, the prince of her dreams. Determined to become human and live happily ever after with her prince, she strikes a bargain with her father's enemy, Ursula, the sea witch, and trades her beautiful voice for legs. To regain her voice, Ariel must win the prince's love and save her father's kingdom in only three days.

The direct-to-video sequel, "The Little Mermaid II: The Return to the Sea," is set several years later, when Ariel and Prince Eric are happily married with a daughter Melody. To protect Melody from Morgana, another evil sea witch, they have kept her mermaid heritage a secret. Melody is curious, like her mother, so happily explores the sea. She becomes a pawn in Morgana's power play to steal control of the ocean from King Triton, but all things work out in the end.

Walt Disney Pictures' 28th animated feature, "The Little Mermaid," debuted in 1989 and won two Academy Awards -- for Best Score and Best Song (for "Under the Sea"). Surprisingly, it represented the Disney animation team's first adaptation of a fairy tale since "Sleeping Beauty," thirty years prior.

At the time of its initial release, critics hailed "The Little Mermaid" as one of Disney's most entertaining animated features and placed it in the same league as many of the studio's all-time classics. Moviegoers turned out in record numbers, making it the most successful animated film up to that time. The film's universal appeal and box-office success helped to launch a renewed interest in the art of animation and marked the beginning of a new era of productivity and creativity at Disney Feature Animation.

Belle, whose name means beauty in French, comes to the palace of the Beast to save her father Maurice, a poor inventor who accidentally stumbled upon the Beast's lair. The angry Beast instantly swears to kill him, until Belle arrives and begs for his safety. The Beast agrees not to harm Maurice on one condition: Belle must stay with him. And so begins Belle's lesson in the true meaning of beauty -- a lesson that will bring her love and happiness ever after.

Unlike most other Disney princesses, Belle is not born of royal blood -- she marries into royalty. But like all Disney princesses, Belle is beautiful, graceful, loyal, and kind. Like Ariel, Belle breaks Disney's passive-princess mold. She is smart (always has her nose in a book), opinionated (she's downright sharp-tongued), and makes her own judgments (she has no patience for Gaston's shallow vanity and looks beyond the Beast's frightening appearance). Her brown hair and eyes make her one of the most physically identifiable princesses, and her willful stubbornness makes her one of the most real.

"Once upon a time, in a faraway land, a young prince lived in a shining castle. Although he had everything his heart desired, the prince was spoiled, selfish, and unkind…" And so Walt Disney Pictures' 38th animated feature film begins, clearly telling audiences that this is the Beast's story, not that of the enchanting female protagonist. Released November 22, 1991, it is surprisingly only the fifth animated Disney film based on a fairy tale, though Disney first adapted the story forty years earlier. When they couldn't figure out a way to develop the second half, it sat on a shelf until Kirk Wise and Gary Trousdale decided it was worth another try.

Screenwriter Linda Woolverton and composer Howard Ashman discovered that the enchanted objects were the key. Ashman came up with characters for the candlestick, teapot and other objects, wrote wonderful songs for them, and gave the film version the shape it needed. Disney filmmakers also reinvented Belle as a more likeable, less passive heroine.

"We felt we needed to energize the story," said producer Don Hahn, "and so we made our heroine move things forward by valiantly going to the castle on her own to fight for her father's release."

In the next section, you'll meet Jasmine, Pocahontas, and Mulan. While these ladies aren't traditional royalty, Disney considers them part of the princess club.