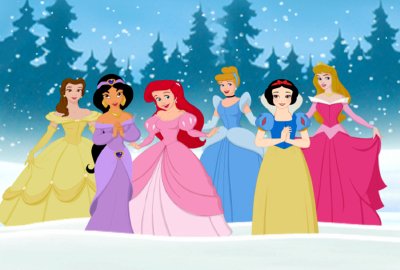 Once upon a time, Ariel, Belle, Cinderella, Jasmine, Mulan, Pocahontas, Sleeping Beauty, and Snow White each ruled her own fairytale kingdom in an animated Disney movie. These days, they are collectively experiencing a different kind of happy ending: They have joined together to become a royal super-sorority known as Disney Princess.

Disney Princess has become bigger than Walt Disney ever dreamed when his struggling studio took a huge gamble to make its first princess movie, "Snow White and the Seven Dwarfs." Some 60 years later -- after just six years developing new Disney Princess films, videos, CDs, toys, house wares, electronics, and other merchandise -- Disney Princess has grown to become Disney's most popular brand, overtaking Winnie-the-Pooh and the company's iconic mascot, Mickey Mouse. Six years ago, the princesses generated $100 million in sales. Now Disney Princess merchandise is sold in 90 countries, and it has earned $3.4 billion since its launch.

How did eight modest girls become the most popular characters in the world?

Individual princesses have been part of the Disney scene since Snow White first graced the screen in 1937; however, only recently has Disney brought these beloved characters together in a collection of fantasy-based girls' entertainment and products. After the initial releases of the earlier films, the princess characters disappeared from popular culture, living on through occasional film and DVD re-releases. The princesses did not ascend to become all-powerful queens until 1999, when they were united under a royal marketing umbrella called Disney Princess.

Andy Mooney left the sporting goods company Nike to become chairman of Disney Consumer Products. He looked at Disney research and found that girls playing make-believe don't want to be just any princess -- they want to be a Disney Princess, especially Cinderella, Snow White, and Ariel from the cartoon movies.

"Starting with Snow White, the rich storytelling of each of Disney's fairytales has captured the hearts and minds of young girls," Mooney said. "The Disney Princess brand enables a girl to become a part of the world of her favorite princess."

And so Mooney grouped Disney's leading ladies -- Ariel, Belle, Cinderella, Jasmine, Mulan, Pocahontas, Sleeping Beauty and Snow White -- under the banner of Disney Princess and began to develop original movies, music, books, and products. They even have their own "Disney Princess Anthem" to boost their team spirit.

Savvy marketing has been key to the success of Disney Princess. Learn how Disney combines marketing and magic in the next section.