How to Host a Speed Dating Event 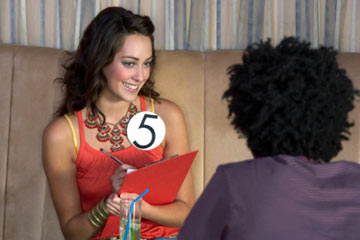 Hosting a speed dating can be fun. And who knows, perhaps your new-found matchmaking skills might spark a love connection or two.
Fuse/Thinkstock

If the dating scene in your town has you and your single friends longing for the days of arranged marriages, or if you're happily attached and ready to take your matchmaking urges to the next level, it may be time to consider hosting a speed dating event.

Speed dating has been around since 1999, when Rabbi Yaacov Deyo and several of his single students put a new twist on the longstanding Jewish tradition of introducing young Jewish singles to one another at chaperoned gatherings. At a speed dating event, participants are paired up in a series of quick five- to seven-minute "dates." When the time is up, a bell or timer is rung, and participants move on to their next one-on-one conversation.

While seven minutes may not seem long enough to determine whether a new acquaintance is a potential match, Rabbi Deyo and other speed dating organizers have found that it gives participants plenty of time to gauge their level of interest or get a feeling that the other person is just not the right fit. As an added bonus, the round-robin setup enables participants to meet more potential matches in one evening than they might otherwise encounter in a month or more of traditional dating.

Speed dating services can be found in just about any major city, but there's no need to wait for the next scheduled meet-up in your area. Our tips for hosting a speed dating event will help you organize a gathering that's fun, relaxing and fruitful for participants while preserving your sanity at the same time.

As promised, we have plenty of suggested speed dating questions on the next page to help you get things started.

According to the U.S. Census Bureau, 96 million people in the U.S. are single. That's 43 percent of the population over the age of 18.

As with any first date, the object of a speed date is to determine if the person sitting across from you is someone you'd like to know better. The difference is that you have just seven minutes to make that decision (and to make a good impression on your date), so start with the questions that matter most to you. We've included a few basics here, but you and the guests at your event might be better advised to skip the small talk and go right to the important stuff, like "What's your favorite breakfast cereal to eat for dinner?"

For a Little More Insight

Of course, the most insightful questions will often be the ones your guests come up with on their own, so encourage them to be creative and ask questions that will help them get to the root of what's most important to them.

For more ideas about hosting a speed dating event, check out the resources on the next page.

5 Things You Should Know: Birthday Party Entertainers
How to Plan a Baptism
5 Tips for Fashion Show Event Planning