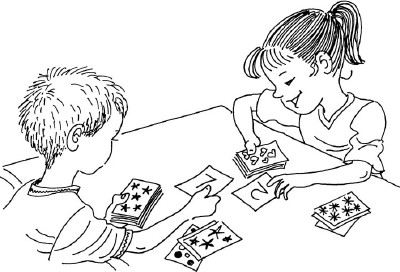 Math War is a great teaching tool -- and it's fun for kids to play.
©2007 Publications International, Ltd.

Card games for kids and adults go back a long way. People have been playing card games of one kind or another since the ninth century! It's thought that the first deck of cards came from China, but playing cards later became popular in Europe and, eventually, America.

Card games can be played with two people, a group of people, or even by yourself (have you ever played Solitaire?). And although many card games are designed for grown-ups, there are a number of card games that kids can enjoy. The following articles offer instructions for just a few.

Here's a different kind of card game -- in this one, you toss the cards! Find out how to play.

Can you think (and move) fast enough to avoid being "chicken"? Learn the rules of this action-packed card game.

How fast can you add two numbers together? It's an important part of this game! Find out how to play.

Making your own "cards" from index cards is half the fun of this addition game. Learn how to play.

First, get the cards in your suit. Next, stack them to build a house. This card game is part luck, part skill, and all fun! Find out about the rules.

Start the fun by playing Hat Trick, the game that tests your skill at tossing cards. Learn more on the next page. 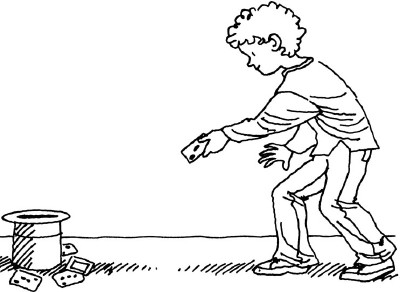 See how many cards you can toss into the hat with Hat Trick.
©2007 Publications International, Ltd.

Get three of your friends together and play Hat Trick! This game only sounds easy -- there is skill involved. It's also a fun activity to play by yourself -- you can practice your skills for the next time your friends come to visit.

Although this game is intended for four people, you can adjust the rules for any number of players -- play as teams, for example, or remove one suit from the deck of cards if only three people are playing.

How to Play "Hat Trick":

Step 1: Take the jokers out of the deck and then divide the deck into the four different suits -- hearts, clubs, diamonds, and spades -- and give a suit to each player.

Step 3: Stand back about six feet (measure with the ruler or yardstick).

When all the cards have been tossed, each player counts the number of cards in his or her suit that landed in the hat. The person with the most cards in the hat is the winner.

If there is a tie, those players play another round to determine a winner. 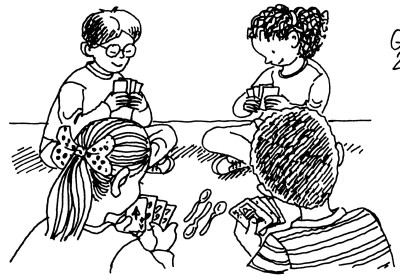 Think fast! You don't want to be the chicken in the barnyard!
©2007 Publications International, Ltd.

"Chicken in the Barnyard" is a great game to play when you get together with a large group of friends -- up to 13 people can play. But it's just as much fun in smaller groups too.

The game is played with sets of four similar cards -- that's the same card in each of the four suits (such as the ace of hearts, the ace of clubs, the ace of diamonds, and the ace of spades), so choose as many sets as there are players. For instance, if there are six players, use all the cards in all four suits from ace through 6.

Get ready to play smart and think fast. You don't want to be the chicken in the barnyard!

How to Play "Chicken in the Barnyard":

Step 1: Count out spoons (or dice) so you have one fewer than the number of people playing the game. (Five players? Four spoons. Eight players? Seven spoons.) Place the spoons in the middle of the table.

Step 2: Deal out all the cards, face down. The goal is to get a set of four cards of the same rank (for example, all four queens).

Step 3: Pick one card from your hand to discard, lay it face down, and slide it to the player on your left.

Step 4: Pick up the card passed to you from the player on your right.

Step 5: Keep picking up and passing cards -- and do it quickly! -- until someone gets a set of four of the same cards. He or she then grabs a spoon from the center.

Step 6: As soon as someone grabs a spoon, everyone else should grab for a spoon, too.

Step 7: Whoever comes up empty gets a "C" by his or her name on the scorecard. Each time someone is left without a spoon, he or she gets another letter in the word "chicken." The first person to spell out the entire word must cluck like a chicken -- and that's the end of the game.

If you can add, you can play the "Add a Card" game. Learn the rules on the next page.

Deal the cards, then add them quickly to win the "Add a Card" game. This game is fun for two players, although if you have more players, it will "add" to the excitement.

You don't need to be a math whiz to play this game; you just need to think quickly -- and know your addition facts!

Step 1: Shuffle the deck. Remind your friend that face cards (kings, queens, and jacks) and aces are worth ten points each.

Step 2: Deal two cards to your friend and two to yourself. Keep the cards face down until one of you says "go" (decide ahead of time who will do this).

Step 3: Whoever is the first person to correctly add up the combined face value of his or her own cards wins the round and the point.

Step 4: The player with the most points when all the cards have been dealt from the deck is the winner.

For another addition card game, play Math War. You'll find the rules on the next page.

Can you add numbers faster than your friend to win Math War?
©2007 Publications International, Ltd.

Can you win a math war? When you play this simple card game, you'll need to think -- and add -- as fast as you can if you want to be declared the winner. You'll have lots of fun with your friends as you get faster at addition, subtraction, and even multiplication.

Math War is great for two players, but it can be played with more players, too -- you'll just need to add more numbers. Which one of you will be the conquering math hero?

How to Play Math War:

Step 1: Use a marker to print numbers from 1 to 12 (one on each card -- and write BIG). You can use the same number more than once. This will make things more fun as you play the game. Decorate the backs of the cards, if you'd like.

Step 2: Deal out all the cards to the players until all the cards have been distributed evenly. Each person makes a pile of his or her cards.

Step 3: Each person draws from the top of his pile and lays a card out, face up, on the table.

Step 4: The first person to yell out the correct sum of the numbers on the cards wins­ that round of play and takes the cards.

Step 5: The game continues until one person has all the cards.

When just two people play, you can vary the game by subtracting the larger number from the smaller one, or by multiplying the two numbers.

Build a house of cards and try to be the last house standing! Find out how to play on the next page. 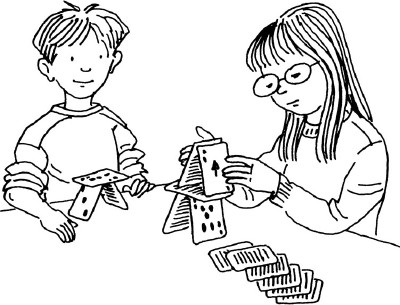