Activities with Rocks and Stones 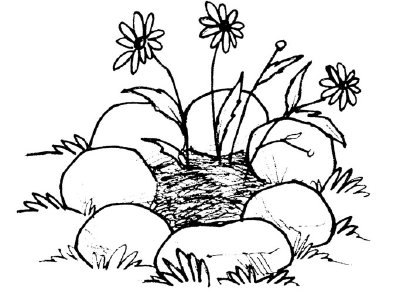 Activities with rocks and stones for kids are more active than they sound. In fact, these summer activities will have you moving all over the place!

Kids can go on a scavenger hunt, learn more about the properties of rocks, or use stones to decorate a garden. These kids' activities will prove that rocks do indeed rock.

To have some rock-solid summer activity fun, follow these links:

Find out who can make the fastest moon journey in this activity.

Go on a hunt for rocks in this summer activity for future geologic explorers.

Split rocks to see what's inside in this rock activity.

Step On It Rock Path

In this rock activity, the rocks are made for walking.

The garden in this summer activity will last all year long.

Get ready to race on rocks in the first activity, a Moon Rock Relay!

Rocks don't move very fast, but you will in this Moon Rock Relay game that tests your agility. Teams step quickly on moon rocks to race to the moon and back in this summer activity.

How to Do Moon Rock Relay:

Step 1: Cut six large rock shapes out of cardboard, and color them with a black marker to look like moon rocks.

Step 3: The first player on each team has to toss out three moon rocks and step on them, each time picking up the back rock and moving it forward to the Moon. The players can only move forward by stepping on the moon rocks.

Step 4: When the player reaches the Moon, she or he picks up the moon rocks, tosses them out again, and repeats the process to get back to Earth.

Step 5: When the first player gets safely back to Earth, it's time for the next player to go to the Moon and back. When all the astronauts on a team have gone to the Moon and come back, they are the winners.

The next summer activity will take you and your kids on a rock hunt.

For a more geological rock activity, go on a Rockhounder's Scavenger Hunt. Learn all about rocks in this activity for kids.

How to Do Rockhounder's Scavenger Hunt:

Rockhounds are people always on the prowl for new kinds of rocks. Become a quick expert on your area's most common rocks with this hunt.

Step 1: Ask your local librarian for books on rocks common to your hometown. Make a list of those rocks -- including descriptions of them -- and make photocopies while you're at the library.

Step 2: Once you get that list home, give it to your friends along with ordinary brown paper bags.

Step 3: Now team up in pairs and head out to find as many of those ordinary rocks as you can. The team with the most rocks gets to talk about their adventure first.

Split rocks to see how fast they crack in the next Rock-Splitting activity.

This Rock-Splitting activity will surprise those who think all rocks are alike. Safety comes first with this summer activity, though. With goggles and gloves in place, kids can then start splitting rocks.

All rocks seem the same. But are they? Not by a long shot. One swing

Step 1: Kids should first ask permission before starting this activity.

Step 2: Wear gloves and safety goggles to protect your eyes. (Rock splinters can cause injuries if you're not careful.)

Step 3: Carefully place the point of an ordinary nail in the center of a rock.

Step 4: Using the hammer, drive the nail in.

Does the rock split in half? Does it chip? Does it refuse to crack? How it reacts to the pounding will tell you a little about how long it might last.

See the next page to learn how to create a garden path.

Step On It Rock Path

Put rocks to work for you in this rock and stone activity. With the Step on it Rock Path, you can make walkways for your garden or simply lay rocks out for decoration.

How to Make Step On It Rock Path:

Step 1: Use the larger stones you discover on your geologic journeys to make stepping stones for your gardens, yard or flowerbeds -- especially to help you make a safe path to where you keep the garden hose.

Step 2: Take your flat, heavy stones and put them about six inches apart on a trail, either between rows in your garden or in flowerbeds near the spigot for the hose.

If a path isn't enough, find out how to create a whole rock garden on the next page.

A Rock Garden is a rock activity that truly rocks and never dies. This summer activity can be done every year as you expand your rock collection.

How to Make Rock Garden:

Many gardeners use rocks in their flowerbeds for decoration. You can do the same.

If you find larger rocks that you'd like to add to your collection, why not consider a rock garden in your own backyard?

Step 1: Clear a nice, flat part of your flowerbed, removing all weeds and grasses.

Step 3: If you like, add some tiny gravel to complete the stoney look.

ABOUT THE ACTIVITY DESIGNERS