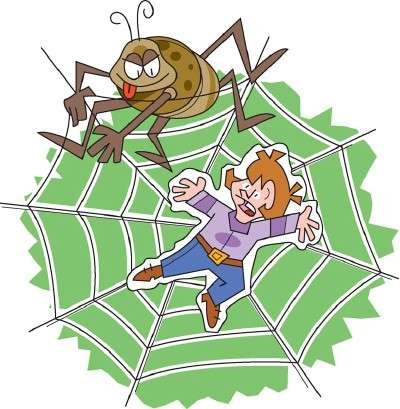 Imagine what it's like to be caught in a spider web!

They're creepy and crawly -- do you have the courage to learn more about spiders in these spider activities?

There are many species of spiders, and they are found all over the world. Spiders produce silk that they use to catch bugs, usually by spinning a beautiful web.

On the following pages, you'll learn spider activities that will teach you more about the bugs themselves and the webs they weave.

Find out how to take really cool pictures of spider webs using a few simple items that you will find around the house.

Learn how to capture and preserve a delicate spiderweb so that you can study it carefully.

If you've got a flashlight, you're ready to go spider sniffing. Read about techniques for tracking spiders that help you see more spiders than ever.

This last spider activity must be done very carefully. Follow the directions on this page to learn how to stimulate spiders.

This last craft is sillier than it is scary. Learn to make a funny decorative spider craft.

Ready to learn all about these eight-legged creatures? On the next page, you will find out how to take great pictures of spiderwebs. 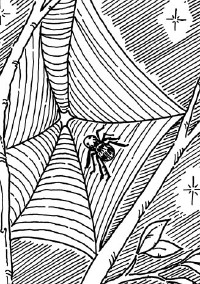 In this Wondrous Webs activity, you'll learn to take cool and spooky pictures of the webbed traps spiders use to catch their prey!

1. Find a spiderweb. Look carefully; they may be hard to see. Sometimes you can see them more easily in the morning because they have dew on them. Use your misting bottle to set a fine water mist on all parts of the web. This will help you see the web better. Notice the pattern of the web. Spiderwebs may be creepy killing machines, but they are also beautiful works of architecture.

2. Take a photograph of the web. The sun is best for this in the morning and evening. Try to stand so that the sun is behind you, lighting up the web. Don't let your shadow fall on the web.

4. Now, have some fun and give your photos an offbeat look. Cut out a small picture of a person from a newspaper. Put the cut-out person on the spider-web. Because newspaper is thin, the web should hold a small picture. Take a black-and-white photograph of your web as if a person was caught in it!

Spiderwebs come in a variety of forms. The pattern depends on the species of spider and where the web is being made. Garden spiders make orb webs, usually shaped in circles or ovals, but other types of spiders make webs in all sorts of strange and scary designs. All of them are constructed mostly to help spiders trap insects.

If you enjoyed taking pictures of spiderwebs, go to the next page and learn how to preserve a spiderweb.

All webs are made out of silk. It is shot out of the ends of the spider's body as a liquid but hardens when it meets the air. Each fiber is made of two strands of silk. 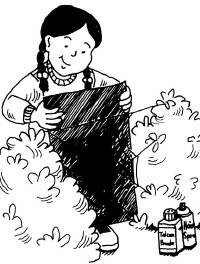 Press the paper on the web.

The spider is truly one of nature's great artists. Our second spider activity teaches you to preserve a spiderweb.

How to Preserve a Spiderweb

To do this project, you'll need to find a spiderweb that isn't occupied. To find out if there's a spider in the web, tap it very lightly. If a spider is in the web, it will move and you'll see it. If the web is someone's home, find another web to preserve.

When you find an empty web, sprinkle talcum powder all over it to make it easier to see.

Then, ask an adult to help you spray hair spray on a piece of black construction paper. While the spray is still wet, bring the paper up against into the web so that the web sticks to the paper.

You've just preserved one of nature's great works of art.

Ready for another spider activity? Learn how to go spider "sniffing" on the next page. 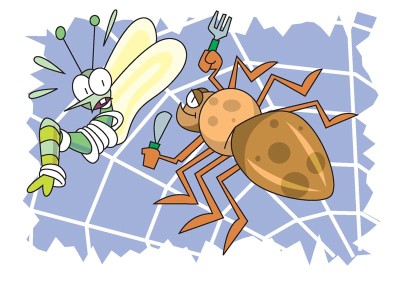 You may see a spider about to eat his prey.

If you can master this next spider 'sniffing' activity, you can track down spiders at night with a flashlight. Really!

Your friends may think you're crazy when you say you're going spider sniffing, but give them each a flashlight and invite them to come with you and they'll be amazed.

Hunt for spiders in open fields where there are lots of shrubs. Go out at night and walk slowly through the area. Turn on the flashlight and hold it directly in front of your nose so that you can look down it.

Look in the shrubs and in tall tufts of grass. You'll be able to spot spiders by the bright, jewel-like glitter of their eyes. The colors are breathtaking.

Once you've spotted a spider, get as close to it as you can. Try to figure out what kind it is. If it sits still long enough, make a drawing. Then return to the area in the daytime and notice what spiders you see. Find out if the same spiders come out in the day and the night.

On the next page, you'll learn how to stimulate a spider. 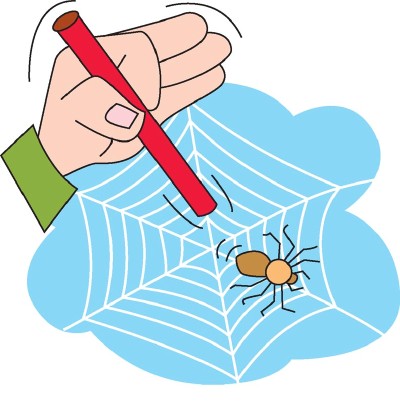 Touch the spiderweb gently with your straw.

In this spider activity, you will learn techniques for spider stimuli. Proceed carefully!

1. How would it feel to be caught in a spider's web? Would the spider know you were there? Take a look at a web that has a spider living on it, and see what insects are caught on the web.

2. Use a plastic straw to gently touch the web. What types of touches to the web make the spider approach? What touches make it run away?

3. Capture an insect, such as a moth, and place it on the web. See if the spider eats it instantly or wraps it up to eat later. How does the spider eat its prey? What part of the spider's body produces the silk to wrap its prey?

Some spiders wait in the centers of their webs. Others wait on the sides and stay connected by a single thread. They wait to feel vibrations on their web.

Gentle touches that vibrate the web may make the spider approach; these are the same vibrations that insects make when they get caught in the web. If a touch is too hard, it will make the spider think that something big is in the web, and it will hide.

If moths are put into the web, spiders will typically bite them and wrap them in silk. If spiders are hungry, they eat their prey right away. They do this by injecting enzymes that dissolve the inside of the insect, which they then suck out of the dissolved body as if it were a thick milkshake. Otherwise, they leave their prey wrapped up for a future meal.

While many spiders spin webs to catch food, some do not. Spiders such as the tarantula and the wolf spider walk around and capture food.

Spiders such as the orb web weaver spin two types of silk threads. The first, which is not sticky, creates the basic framework of the web. The next task is to apply the sticky silk, which catches the insects.

Have fun learning more about spiders!

On the next page, find out how to make a silly spider craft using an egg carton and google eyes. 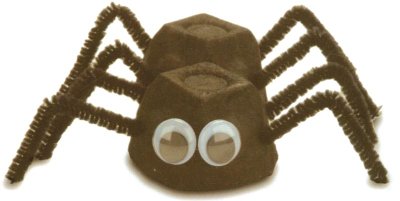 This silly spider isn't too scary, but he is fun to make.

Make a bunch of not-too-spooky silly spiders to haunt a Halloween party table. These google-eyed spiders are easy to make and don't require too many art supplies.

How To Make a Silly Spider:

Step 2: Punch 4 holes along each side for the legs -- 2 on each side of each cup. Cut 2 chenille stems in half. Thread one piece into one hole and out the hole next to it; pull through until both ends are the same length. Bend them to shape the legs. Repeat with the other 3 chenille stem pieces to make 8 legs total.

Step 3: Glue the wiggle eyes to the front of one of the cups.