Tools You'll Want to Bring to the Salon 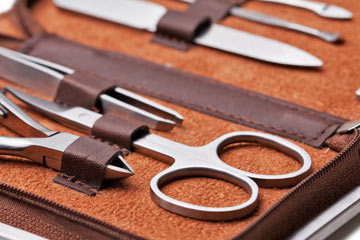 Should you bring your own manicure kit along to the salon?
©iStockphoto.com/Thinkstock

About a decade ago, I met my future in-laws for the first time when my then-boyfriend and I hopped a plane to picturesque Laguna Beach, Calif. Thrilled to be on hiatus from my standard cubicle lifestyle, I asked my boyfriend's mother if she wanted to head to the salon for a manicure/pedicure extravaganza. She politely thanked me for the invitation, but declined. When I found out why, I completely understood -- she had recently finished a course of antibiotics and lost a fingernail thanks to a very painful infection caused by a tainted manicure. Since then, she's done her own nails to avoid a repeat experience. After that, stories of manicure mishaps started cropping up all over the place. My grandmother was one, Paula Abdul was another, and you probably know at least a couple of people with similar experiences.

Although many nail salons are fastidiously clean, others are not, so there's always risk involved when you're using tools and foot baths that other people have gotten up close and personal with. In fact, fungi, bacteria and blood-borne viruses like hepatitis B, hepatitis C or HIV (eek!) are all possible contaminants. Hmm...the latter options almost make my mother-in-law's experience seem like a paid vacation, yes?

Some tools can be reused if disinfected properly, but others cannot, like non-metal nail files. The most effective sterilization method is using an autoclave, a contraption with a blue light inside that's visible in most nail salons. Some salons elect to soak tools in antibacterial solution (the blue stuff in that jar on the salon counter), which is also satisfactory. Don't hesitate to ask your technician to replace any tools that fall on the floor. Also, make sure that you don't have an existing nail infection beforehand. You don't want to go around blaming people for something they didn't cause!

If you don't want to chance infection, but still want the occasional mani/pedi, you can always opt to bring your own tools. Note: it's pretty hard to lug around your own foot bath, so either opt for a plain old pedicure (without the bubbly water), or make sure they properly disinfect the foot spa using antibacterial solution or bleach (just make sure it's been thoroughly rinsed) before you stick even one piggy in.

The items you'll need are probably lying around your house, anyway. Generally, manicures and pedicures require you to bring fingernail clippers, toenail clippers, a foot buffer, a cuticle pusher and a cuticle nipper (although some people opt not to have cuticles cut, and that's just fine). You'll also need a nail file, but steer clear of nail-damaging metal files. Of course, don't forget to sterilize your own tools at home using an antibacterial solution before each and every use. Just because they're yours doesn't mean that they can't grow icky bugs on them, too.

One other nail care necessity to bring is much more pleasant: polish. The salon's polish is likely just fine, but if you bring your own you'll be able to do touch-ups at home more easily.

How does a fish pedicure work?
How to Blend Your Makeup Flawlessly
Easy Guide to Makeup Primers