Recycle Your Old Crocs and How 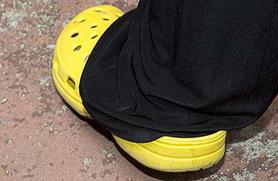 Remember those shoes called Crocs? They were a fad a few years back, but they're still around, and people still wear them. They may not be at the forefront of the U.S. consciousness, but they are on the forefeet of some people who live in the nation.

Back in the day, Crocs were quite controversial. They're not made of animal products, so people who don't like wearing animal parts could wear them, and they're also made out of minimal materials.

On the other hand, Crocs are derived from petroleum products, and they don't biodegrade. Specifically, the molded clogs are created from a proprietary closed-cell resin called Croslite, which is a type of foam. For a while, recycling them was nearly impossible.

You can recycle your lightly worn Crocs through a program called Soles4Soles. Simply take your old Crocs to a drop-off location near you. If you have more than five pairs to donate, you can ship them. Soles4Soles will even help you organize a shoe drive if you're super motivated.

Your old Crocs will get cleaned and then sent to those in need in the U.S. or to people in less-developed regions of the world. Soles4Soles has a two-pronged approach to donating shoes: giving them to people who have been affected by a natural disaster or sending them to entrepreneurs in the developing world so they can resell them.

So if you have some old Crocs taking up space in your closet, it might be a good idea to donate them and make sure they get to the feet of someone who truly needs them.

Ridiculous History: Nike's Very First Shoes Were Made With a Waffle Iron
Spring Shoe Trends: Love or Hate?
5 Alternatives to Flip-flops for Men