Ultimate Guide to 'The Incredibles'

The Idea for 'The Incredibles' 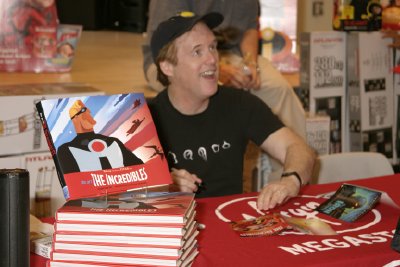 Copyright Disney/Pixar. All Rights Reserved. Writer and director Brad Bird was a new father when he thought of the idea for a superhero father, who became Mr. Incredible.

"The Incredibles" began in the imagination of director Brad Bird, a filmmaker who wanted to make a motion picture that would capture everything he'd always loved about the movies: grand adventure, unconventional families, inventive thrills, cutting-edge imagery, sharp humor, and characters so compelling and real you can't help but become involved in their emotional and moral dilemmas. The hitch was that Bird wanted to do all of this in an animated feature that would raise the art form to a new level of dramatic achievement.

Bird believed passionately that it was possible. At the time he came up with the story of "The Incredibles," he was also a new father. This led to the creation in Bird's mind of a father -- a superhero father -- who is forced to give up his passion (in this case, saving the world) for the good of his family.

Enter Bob Parr, formerly Mr. Incredible, whose family long ago entered the Superhero Relocation Program and is living a typical, foible-filled suburban life until a mysterious communique gives Bob a chance to rescue the planet and his own sense of self-worth.

As Bird began to write "The Incredibles," two very different stories came together: (a) a wildly imaginative spy adventure and (b) a drama about the ties that bind us that explored how the greatest superpower of all might simply be the power of a family. Bird began to view the Parrs as being pretty much like the rest of us -- facing the daily grind of bosses, traffic, and minor misunderstandings that get blown out of proportion -- but just a little more incredible.

How Things Got Started

In addition to pushing the technical limits of animation, Bird hoped to push the form's storytelling potential to a new edge. "To a certain degree, I was inspired most by the classic Disney animated films like 'Lady and the Tramp' with characters that have stood the test of time," he says. "The question was how to do that with the very best tools the art form has to offer today."

When Bird finished an early draft of the script, he brought the story to the only people he was convinced would understand his vision for an animated film that he hoped would look, feel, and be produced unlike any other: Pixar Animation Studios. Innovation has long been the name of the game at Pixar, the company behind many of animation's biggest blockbuster hits and critical sensations, including the pioneering "Finding Nemo." The studio is always looking for original stories from creative visionaries, and the minute John Lasseter -- Pixar's creative VP -- heard Bird's pitch, he knew he had found one.

Lasseter also knew that "The Incredibles" would be an unmatched challenge for Pixar. Not only would it be the first time the studio had tackled wholly human characters, it would be the trickiest, biggest, and most complex production the studio had ever tackled. The story unfolds on nearly 100 different sets -- ranging from a whimsical, modern suburbia to the lush and untamed jungles of Nomanisan Island. Because the film emphasizes the characters' humanity, the Pixar team had to create the most believable human animated forms in history -- with realistic skin, hair, and clothing.

Would creating "The Incredibles" prove to be an impossible task?  The next sections take a close-up look at the Pixar production process.