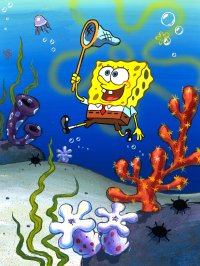 In the first four seasons of "SpongeBob SquarePants," 82 shows and a full-length movie were created. Each show features two episodes for a total of 164 episodes. Here is a sampling of the episodes.

SpongeBob applies for a job at the local burger place, the Krusty Krab. His lifelong dream has been to work there, but can he prove to Mr. Krabs and Squidward that he's worthy?

SpongeBob tries to get rid of a pesky clam shell at the front of his lawn, which usually annoys Squidward because all the mess ends up on his lawn.

SpongeBob meets a squirrel named Sandy, who invites him to her undersea treedome for tea one afternoon. Only problem is, it's inside, and SpongeBob runs the risk of drying out completely if he attends.

SpongeBob decides to leave his civilized life in Bikini Bottom and go live uninhibited and free among a pack of wild jellyfish. Meanwhile, Sandy and Patrick try to come up with plans to try to get SpongeBob back.

Squidward wants to sell his house and move away, but he knows that no one will buy it if they see rambunctious SpongeBob around. So Squidward decides to tell SpongeBob that it's "Opposite Day," in hopes that he will behave around the real estate agent.

SpongeBob discovers the means to enter the dreams of his friends. But every time he enters a dream, he ruins it, so his friends come to his house and tell him to stop messing with their dreams.

SpongeBob comes down with a case of the SUDS -- a flu-like illness in which bubbles escape through pores in the body. Then "Dr."  Patrick comes over and tries to convince SpongeBob that he can't go to the doctor, telling him about all the bad things that might happen, such as having to read old magazines.

SpongeBob eats a peanut onion sundae and acquires a hideous case of bad breath. He can't understand why everyone runs away from him whenever he talks to them.

When Pearl remodels the Krusty Krab into a hip hangout, SpongeBob worries about the fate of the original restaurant (not to mention, his position as fry cook).

SpongeBob and Patrick go to a fan convention. They meet Kevin C. Cucumber, the leader of the Jellyspotters club, and SpongeBob vows to try his best to earn ranks with them.

Mr. Krabs turns SpongeBob's idea for Jelly Krabby Patties into a colossal customer favorite, and it leads to trouble when the local population of jellyfish becomes hunted to near-extinction.

SpongeBob and Patrick compete in the Annual Fry Cook Games.

SpongeBob has to write an essay and tries to find things to distract himself from doing it. Then he dozes off and has a scary dream.

Patrick's parents are coming over. Patrick doesn't want to look stupid, so he tells SpongeBob to be stupider than him.

A health inspector shows up at the Krusty Krab, and while he is there, SpongeBob and Mr. Krabs see the news about a guy passing himself off as a health inspector to get free food. Mr. Krabs is so mad that he and SpongeBob make a Krabby Patty made with a bunch of nasty things. After it is served to the inspector, he chokes to death on a fly; however, the two think he died from the patty. They later find out that he was a real health inspector.

SpongeBob and Patrick buy a big-screen TV only so that they can play inside its box.

SpongeBob finds a rotten Krabby Patty under the grill, and Mr. Krabs tries it and says that it still tastes good. After Mr. Krabs gets out of the hospital, he says he'll never be cheap again. Of course, he doesn't keep his promise.

"I Had An Accident"

SpongeBob fears getting hurt in the outside world, so he decides to stay indoors forever.

Plankton steals King Neptune's crown and frames Mr. Krabs. Now lacking something to cover his receding hairline, a furious Neptune goes after Krabs. SpongeBob manages to strike a deal with the god of the sea: He and Patrick will embark on a perilous journey to faraway Shell City to recover the crown if Neptune spares Mr. Krabs's life. On their journey, they encounter creepy monsters, fishy thugs, and Plankton's ruthless hitman, Dennis. With SpongeBob and Patrick otherwise occupied, Plankton initiates "Plan Z," his ultimate plan to steal the secret Krabby Patty formula and rule the world.

Mr. Krabs sells the Krusty Krab to a conglomerate, but his retirement doesn't wind up being what he thought it would be.

"Have You Seen This Snail"

While trying to beat a paddle-ball world record, SpongeBob forgets to feed Gary -- for 10 days. So Gary runs away to downtown Bikini Bottom, where he is taken in by a kindly old woman who confuses him with one of her many deceased pets. Once SpongeBob realizes he has neglected Gary, he sets out to find his pet.

After Mr. Krabs gets a huge hotel bill, he decides he can make a profit from opening his own hotel. The plan, of course, backfires.

Mrs. Puff gets fired from her boating school job because she didn't pass SpongeBob on his driving test. A more intense instructor then takes her place.

Mr. Krabs forces SpongeBob to take his very first vacation, and SpongeBob doesn't know what to do with his spare time.

Those are the highlights of "SpongeBob" thus far. What's next? Find out on the following page.