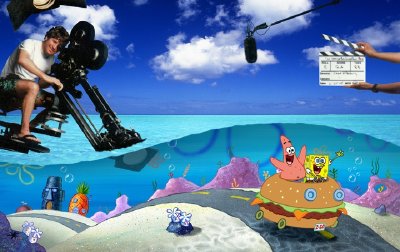 A staff of 45 works on each episode of "SpongeBob."
Photo courtesy Nickelodeon

In 1993, six years before "SpongeBob SquarePants" debuted, creator Stephen Hillenburg was one of the producers on another Nickelodeon cartoon, "Rocko's Modern Life." When that show completed production in 1996, Hillenburg began working on "SpongeBob." To get the project off the ground, Hillenburg put together a team. Creative Director, Derek Drymon, writer Tim Hill, and voice actors Tom Kenny and Doug Lawrence had all worked on "Rocko's Modern Life" with Hillenburg. In addition, Merriwether Williams, who had Nickelodeon cartoon experience as a story editor for "Angry Beavers," joined the "SpongeBob" team of creators.

Hillenburg created a cast of characters. He filled the undersea town with places for the characters to live, work, and get into situations that would make them famous. When Hillenburg was ready to present the show's concept to Nickelodeon, he used all of his interests and skills to make a presentation that would sell the concept. He brought in an aquarium, artwork, sculpted characters, and an original theme song that explained the storyline of the cartoon.

"We know that children have an appetite for new stuff; we are always on a mission to bring them new stuff. But we also know that one of the things that make them come back for more is having real characters that they can connect to emotionally," said Cyma Zarghami, Nickelodeon's president and the head of MTVN Kids and Family Group, in an interview with Worldscreen. "We pay a lot of attention to story and character. 'SpongeBob' came along at a time when people seemed to really need an optimistic character to rally behind."

The rest is animated sitcom history. "SpongeBob" has been soaking up rave reviews ever since. Nicole Parker, senior director of communications for Nickelodeon and Nicktoons Network, told us that even after four successful seasons, Hillenburg weighs in on every show to ensure the scripts remain true to his original vision.

Story editor Steven Banks and writing coordinator Melissa Webster, both in the Burbank offices of Nickelodeon where "SpongeBob SquarePants" is produced, spoke with us about how they create a show from start to finish.

"From beginning to end, it takes ten or eleven months to create one eleven-minute long episode." Webster said. "Writers submit premises and outlines for stories, but they don't write the script. Their story ideas must then be submitted to the Network for approval. Once a premise is approved it goes to the storyboard directors who write the dialogue and draw all the pictures."

"It's a board-driven show," Banks said. In other words, the storyboards are followed for dialogue, action, and sound effects. But before the storyboard stage, Banks and the three writers who work under him must create stories and "pitch" or present them to the co-cxecutive producer, Paul TIbbitt.

"It's very challenging to come up with 40 different stories per season. Each show features two stories. In the four seasons the show has been running, that adds up to 160 different stories," Banks said. "One of the things that makes 'SpongeBob' work so well is the fact that there are not too many characters to keep track of. However, that is also what makes creating new stories all the time more difficult."

Once the storyboards are completed and approved, they are sent to Korea, where the animation is done. "When animation is complete, it is sent back to us, and Paul Tibbitt decides where music should be added and where the sound effects fit in. He turns it over to Nick Carr, who selects the music. Sound effects are added last, the final mix is done, and the show is finished," Banks said.

In the next section, we'll introduce you to the characters and voice talent that bring them to life.