by Linda Williams Aber
NEXT PAGE 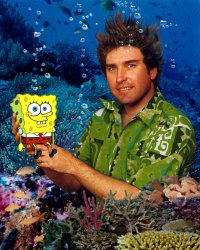 SpongeBob SquarePants has been called "goofy," "nerdy," and "lovable." He's also been called the most popular animated sitcom on TV and the top TV series on Nickelodeon. So just how has this sea sponge soaked up so many viewers from age two to adults since his premiere on Saturday morning, July 17, 1999?

Perhaps it's the intelligence and sophistication of the writing and the more than 50 people who work to create a single episode. With the childlike nature of SpongeBob and his best friend Patrick the Starfish, enhanced by a vocal cast that includes veteran stars Tim Conway, Ernest Borgnine, and Marion Ross, the cartoon appeals to children and adults alike. The show's creator, Stephen Hillenburg, has been quoted as saying, "We just try to make ourselves laugh, then ask ourselves if it's appropriate for children."

In our conversation with Nicole Parker, senior director of communications for Nickelodeon and Nicktoons Network, she said, "Since 'SpongeBob SquarePants' was launched in July 1999, it has emerged as a pop culture phenomenon and one of the most popular series in kids' television history. The Saturday morning play of the series currently ranks as the No. 1-rated program among kids [ages] two to eleven. Nearly 61.4 million viewers tune into the show each month. Adult viewers also continue to tune-in and have increased by 76% since the premiere of the show."

The show is set deep in the Pacific Ocean in a city called Bikini Bottom. The inhabitants of the city include SpongeBob SquarePants, a square yellow sea sponge who lives in a pineapple; SpongeBob's pet snail, Gary, who happens to meow like a cat; Squidward Tentacles, a grumpy neighbor who lives in a moai (an Easter Island head); SpongeBob's best friend Patrick, who lives under a rock; Mr. Krabs, SpongeBob's boss and owner of the Krusty Krab; Plankton, owner of the Krusty Krab's rival restaurant, the Chum Bucket; and Sandy Cheeks, a sea-dome-dwelling squirrel.

Jellyfish buzz and sting like bees, worms bark like dogs, scallops act like birds, and SpongeBob talks on a "shell phone" and eats "sea-nut butter." Undersea puns bubble up throughout the program, even as life underwater seems very familiar to life above.

Stephen Hillenburg, the Creator of "SpongeBob"

Hillenburg is the real-life character who came up with the unusual group of SpongeBob SquarePants and friends.

Hillenburg is one of those people who proves the adage that every interest and experience is a brick in the building one becomes. His combined interests in marine biology and animation are what eventually led him to create "SpongeBob SquarePants."

"Working as a marine science educator, I had the chance to see how enamored kids are with undersea life, especially tide pool creatures. By combining this knowledge with my love for animation, I came up with SpongeBob SquarePants," Hillenburg said in a Washington Post interview.

"At first I drew a few natural sponges -- amorphous shapes, blobs -- which was the correct thing to do biologically as a marine science teacher." Hillenburg continued. "Then I drew a square sponge and it looked so funny. I think as far as cartoon language goes he was easier to recognize. He seemed to fit the character type I was looking for. Even the villainous Plankton, he's still flawed and you still root for him in a way, and the style of humor is simple and it's about human behavior, and everybody can identify with that." For more about creator Stephen Hillenburg, check out our profile of him.

So, how did the show get started? We'll tell you in the next section.