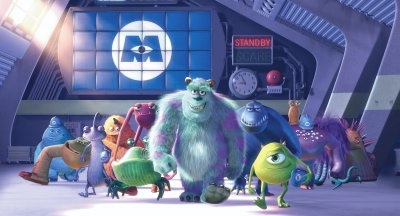 Copyright Disney Inc. The "Monsters, Inc." world is based on real-life industrial landscapes.

Inventing the monsters' world was one of the most challenging -- and most enjoyable -- assignments for the creative team on "Monsters, Inc."

"In Monstropolis, they've got huge buildings built of steel and stone because they need to accommodate three-ton guys walking around," says director Pete Docter. "And everything from doors to telephones to cars had to be multipurpose in order to handle everyone from eight-foot monsters to little guys who are only two inches tall."

In the early stages of researching the look and style of Monstropolis, production designers went to local factories, refineries, assembly plants, blimp hangers, and other industrial sites that could inspire their designs. They also took a field trip to Pittsburgh to observe firsthand what an older industrial town built around factories looks like.

"We were trying to make sure that the monsters would be the most colorful things in Monstropolis," says production designer Harley Jessup. "So we made the city somewhat muted and the factory a bit on the cool side color-wise." In all, 22 different sets were designed for the film, ranging from Boo's bedroom to the trendy sushi eatery, Harryhausen's and the remote blizzard-bound home of the Yeti.

Learn how Pixar's animation process works in the next section.