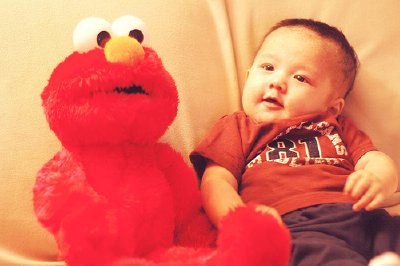 © Kelly Cruz Elmo is, of course, a big hit with his viewing audience.

Part of what makes "Elmo's World" so successful is the show's repetition. Preschoolers thrive on that repetition, and learn from it.

The following guide describes some of the new "Sesame Street" episodes that feature Elmo. Download the episode guide here for easy reference.

Sesame Street's newest resident, Abby Cadabby, is looking for someone to play with. When first she meets Oscar, who isn't very nice to her, Abby begins to feel sorry that her family moved to Sesame Street. Then she meets Snuffy and Big Bird. They invite her to play hide-and-seek with them and their friends, and she also practices her fairy-in-training skills and learns to count to ten. She also meets Elmo and Zoe, who invite her play with them. Abby is so happy that she floats in the air.

It's Abby's first day of school at the Storybook Community School, and she is very excited. Mrs. (Mother) Goose introduces Abby to the class, and they make her feel at home. However, Abby doesn't have anything to present for show-and-tell. When Abby accidentally taps Elmo with her magic wand, he is transported to Abby's school. Abby introduces Elmo for show-and-tell and explains to the class that he is a good friend.

Gabi and Miles are graduating from high school. Elmo can't believe they are finished with school when he hasn't even started. Gabi and Miles reminisce about their very first day of school and tell Elmo how they remember the books, toys, blocks, and art supplies in their classroom. They also remember that they both wanted to play with a fire truck at the same time. This taught them about sharing and how it is an important part of being in schoo. This prompts Elmo to think about what it will be like when he goes to school.

Elmo wants to play school, but he can't find a teacher. As Alan works at Mr. Hooper's Store, he agrees to become Elmo's pretend teacher. Throughout Elmo's day, he gets to draw a picture, listen to Mr. Alan read a book, and sing the alphabet song. Other kids join Mr. Alan's school class, along with Old McDonald's goat and an elephant that has come all the way from Staten Island to learn how to rhyme. At the end of the day, Elmo thanks Mr. Alan for the best day ever of pretend school.

It's National Try a New Food Day on Sesame Street. Baby Bear, who always has his porridge with brown sugar and honey, is going to try it with some fresh fruit on top. He thinks it's delicious and wants to try his porridge with a new fruit every day. Oscar tries a cherry on top of his chocolate ice cream with fish, sauerkraut, and marshmallows; Gordon tries sushi; Cookie Monster tries celery; Telly Monster has his grilled cheese sandwich cut into squares instead of triangles; and Elmo tries asparagus with the encouragement of best friend Zoe.

What's in store for Elmo? We'll tell you a few secrets in our final section.