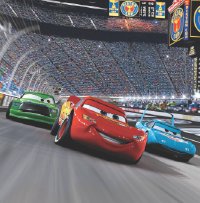 Over the past 20 years, Pixar Animation Studios has pushed the limits of computer-animation to new heights. "Cars" posed some of Pixar's greatest challenges to date.

Creating the metallic and painted surfaces of the car characters was the biggest challenge. An algorithmic rendering technique known as "ray tracing" was used for the first time to give the filmmakers the look and effect that they wanted. "Given that the stars of our film are made of metal, [director] John [Lasseter] had a real desire to see realistic reflections, and more beautiful lighting than we've seen in any of our previous films," says supervising technical director Eben Ostby. "In the past, we've mostly used environment maps and other matte-based technology to cheat reflections, but for 'Cars' we added a ray-tracing capability to our existing Renderman program to raise the bar."

Ray tracing has been around for many years, but it was up to Pixar's rendering team to introduce it into nearly every shot in "Cars." Jessica McMackin was responsible for rendering the film's final images, while Tony Apodaca had to figure out how to minimize the rendering time. In addition to creating accurate reflections, they used ray tracing to achieve other effects, like shadows from multiple light sources, occlusion (the absence of ambient light between two surfaces, such as a crease in a shirt), and irradiance (glowing casts of light).

Another big accomplishment was the ground-locking system that kept the cars firmly planted on the road. Characters supervisor Tim Milliron managed the group in charge of modeling, rigging, and shading the characters, and wrote the code for this program. "The ground-locking system is one of the things I'm most proud of on this film," says Milliron. "In the past, characters have never known about their environment, but on 'Cars,' this system is built into the models themselves, so as you move the car around, it sticks to the ground. It was one of those things that we do at Pixar where we knew going in that it had to be done, but we had no idea how to do it."

Milliron's group was also responsible for the stadium car crowds during the film's opening and ending race sequences. With 120,000 cars in the stands, they were the biggest crowd scenes ever done at Pixar (far surpassing the milling ants in "A Bug's Life"). Complicating the situation, all of the crowd vehicles were animated.

Steve May, the effects supervisor for "Cars," brought that same level of scrutiny to nearly half of the film's 2,000 shots. Among the numerous effects created for the film were dust clouds trailing behind cars, tire tracks, skid marks, water, smoke, and drool (from Mater's front end).

Delivering authenticity to the cast for "Cars" are vocal performances from some of the greatest names from the racing world, including Richard Petty, Mario Andretti, Dale Ernhardt Jr., Darrell Waltrip, and Michael Schumacher. Veteran Olympic and sports commentator Bob Costas lends his seasoned voice to the character of Bob Cutlass, the colorful host at the film's racing events. Tom and Ray Magliozzi (known as Click and Clack, the Tappet Brothers), hosts of the popular NPR program "Car Talk," weigh in as the not-so-desirable sponsors Rusty and Dusty Rust-eaze.

To help capture the thrills and excitement of the film's racing scenes, Jeremy Lasky, the director of photography and the man responsible for camera and layout, and his team visited many car races, and had extensive talks with the camera experts who photographed such events. Veteran Fox Sports director Artie Kemper, a pioneer in televising car races, proved to another valuable information source.

Says Lasky, "Artie gave us really great notes about where he would typically place his cameras on the track. He also talked about shots that he wished he could get. We were able to do a lot of things that were impossible for him to do. We could put a camera under the car, place one on the middle of the track, set up a crane shot that comes down and have the cars race right over the top of the cameras. Artie told us that he wished he had those toys.

"The camera placement in 'Cars' allowed us to put the audiences right in the middle of the excitement. We put them into a world they were familiar with, and then we hit them with shots that they've never seen. The film has these spectacular moments where the cars are ripping two millimeters past the camera lens, which is impossible in live-action, and we set it up for them to believe it's possible."

How the Sound Works

To underline the racing tie-in, director John Lasseter knew he needed a great score. He hired longtime collaborator Randy Newman, a 2002 Oscar winner for his song "If I Didn't Have You" from "Monsters, Inc."  For "Cars," Newman worked in the studio with a 110-piece orchestra and recorded side sessions with mandolin, guitar, and harmonica to give the sound a bluegrass quality.

"Every Randy Newman score is unlike the one before it," says Lasseter. "He can write the most emotional songs, and he can write some of most humorous songs you've ever heard. He's incredibly funny and smart. Randy's score for 'Cars' reflects the two distinct worlds -- the modern world where it's all about being fast; and Radiator Springs, where the one commodity they have is time. Everything is slower there, and Randy uses a combination of bluegrass, jazz, and pure Americana to capture that. The racing world has a heavy dose of rock 'n' roll."

In the next section, we'll introduce you to all of the cars that make up the movie's world.