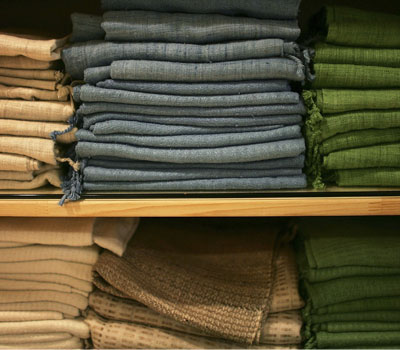 In our imaginations, organic clothing usually isn't very fashionable. It reminds us of Birkenstocks, shapeless tunics and burlaplike textures -- tie-dye optional. But our imaginations are stuck in the 1970s. Organic and alternative fibers have come a long way since then.

Organic clothing is made of all-natural, non-synthetic materials and is a part of the organic agriculture movement. This movement emphasizes farming and processing that work with nature and help minimize air, soil and water pollution. Organic clothing materials come from plants that have not been radiated, genetically modified or treated with synthetic or chemical pesticides. Any product labeled organic, whether it's a T-shirt or an apple, has to meet national standards set up by the United S­tates Department of Agriculture (USDA).

In this article, we'll explore the different fabrics used in organic and sustainable clothing, find out where to buy these fashions and learn about the environmental impact of non-organic fibers. 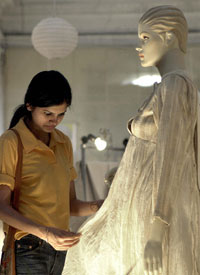 Organic fabrics like cotton, wool, silk and hemp must meet regulations set by the Organic Trade Association regarding fiber processing, production, dyeing and non-toxic handling. It's important to look for organic certification on labels to ensure that a product is actually organic. Sustainable fabrics are produced without federal guidelines and certification.

Organic cotton is the most popular type of organic fabric. According to the Organic Consumers Association, the demand for organic cotton clothing doubled between 2005 and 2006 [source: OCA]. Organic cotton is also used in personal care items like sanitary products, cotton swabs and baby diapers, as well as home goods like sheets, towels and even stationery.

Organic wool, silk and hemp are also popular organic materials. Hemp is a highly durable natural fiber that requires no pesticides and little water to grow. Because it's a renewable resource, farmers are able to grow hemp crops year after year. Hemp fibers can be used in clothing, skincare products and paper. To make hemp fabric less rigid, fibers are often blended with cotton or silk.

Bamboo has become a popular sustainable fabric choice for companies wishing to transition into eco-friendly fashion. Bamboo grows fast and can be farmed without pesticides or chemical additives. It's also 100 percent biodegradable. To make bamboo fibers, the plant is pulped until it separates into thin threads that can be spun and woven into cloth. Bamboo makes excellent fabric for sportswear because of its natural antibacterial and moisture-wicking properties. Bamboo fabric is also noted for its silky feel.

Organic and sustainable fabrics sometimes require special care. Always check the label for cleaning instructions on each garment. While many fabrics can be tossed into a washing machine, some fabrics require dry cleaning or hand washing. Eco-conscious cleaners may wish to use phosphate-free and biodegradable detergents and air-dry clothing to reduce energy consumption.

In the next section, we'll find out where to buy organic and sustainable clothing and learn if it's really more expensive than conventional products.

It's likely that your neighborhood drycleaner uses PERC, a petroleum-based solvent that is a known carcinogen. Drycleaners sometimes use DF-2000, a hydrocarbon solvent that is harmful to the environment. If you're looking for a clothing care process that makes less of an ecological impact, try green cleaning which is CO2-based, or opt for steam cleaning your clothing. Wet cleaning, a water-based process, is PERC-free but is not safe for all fabrics. 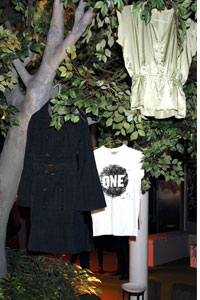 Clothing hangs from a tree at the 2006 launch party of Edun One, a label owned by the rock star Bono and his wife, Ali Hewson, in London.
Dave M. Benett/Getty Images

Many consumers switch to organic products out of concern for the environment. Some consider ethical factors like animal rights and fair labor practices when making purchases. However, others are simply drawn to the quality of organic and sustainable fabrics. Consumers are catching on to the organic clothing trend. In 2003, sales of organic women's clothing grew more than 30 percent. Organic infants' clothing and diaper sales grew more than 20 percent and sales of men's clothing grew by 10 percent [source: OCA and OTA].

Some designers try to persuade consumers that organic clothing can improve health by reducing stress and hydrating and detoxifying the body. However, no studies have linked eco-friendly fabrics to good health. The health benefits of organic clothing are more indirect. Organic production methods result in fewer toxic emissions into the air, water and soil.

Many consumers remain concerned about the price of organic items. When you shop for organic cotton, you can expect T-shirts blended with 10 percent organic fiber to raise the price about 7 cents. Products that use 100 percent organically grown cotton can cost up to 20 to 50 percent more than conventional clothes [Source: Sustainable Cotton Project].

High-end clothing comes with steep prices, regardless of whether it's organic or not. Mainstream retailers like the Gap, L.L. Bean, Nike and Levi's have begun offering organic products at more comfortable price points. In 2003, American Apparel rolled out a line of cotton clothing called Sustainable Edition. Even bargain stores like Wal-Mart are beginning to offer eco-friendly clothing lines.

High-end designers have embraced organic clothing. The Oscar de la Renta gown (L) is made from silk, hemp and Polylactic Acid (PLA), a corn-based polyester. The Halston dress is also made from PLA.
Photo by Scott Olson/Getty Images

Clothes made from organic cotton, hemp, bamboo and recycled soda bottles are making a splash in sports apparel. Gaiam offers a line of ActiveSoy active wear made from leftover soy fluid products like soybean oil, tofu and soy milk. The liquid waste is spun into yarns that are then blended with cotton. Hind makes a T-shirt called the Stratus, blended from 60 percent polyester and 40 percent bamboo. Patagonia has been a leader in organic sportswear since it began using organic fabrics in 1996. The company uses 100 percent organic cotton in its outdoor collection and uses fibers made from recycled soda bottles to spin fleece fabric.

As organic and sustainable clothing become more affordable, it's easier for anyone to buy organic products. However, some critics warn that large retailers' low prices are possible because industrial organic farms are not as stringent in their practices as small, local operations.

In the next section, we'll learn about the health risks associated with pesticides and insecticides and look at the downsides of organic clothing.

Veganism is a cruelty-free diet and lifestyle that avoids the consumption or wearing of animal products. People become vegans for environmental, ethical, health and religious reasons.

Most vegans do not wear leather, fur, wool, down or silk. However, some vegans rationalize silk as an acceptable material because it is an insect rather than animal product. 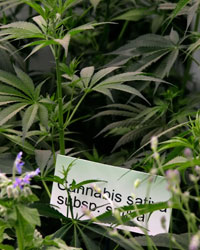 Cannabis sativa plants are displayed during the Chelsea Flower show held in London. The plants have been cultivated are grown strictly for their fiber.
Miles Willis/Getty Images

There are about 12.8 million acres of conventional cotton grown in the United States with about four pounds of cotton produced per acre. Fifty-five million pounds of pesticides were sprayed on those 12.8 million acres, ranking cotton third behind corn and soybeans in pesticide dependence. Worldwide, cotton is also a pesticide-heavy crop, using approximately 25 percent of the world's insecticides and 10 percent of the world's pesticides. In comparison, there were approximately 6,500 acres of certified organic cotton planted in the United States in 2005. Wool production also requires high levels of insecticides and antibiotics to protect animals from pests and disease [source: OTA].

Synthetic and chemical pesticides and fertilizers are associated with some sobering statistics.The Environmental Protection Agency (EPA) considers seven of the top 15 pesticides used on cotton in the United States as "possible," "likely," "probable," or "known" to cause cancer in humans [source: EPA].

Hemp, because of its association with the recreational drug marijuana, has a tricky reputation to overcome. Although the plants grown for fiber are of a different variety than the drug, the politics of hemp has made it illegal to grow the plant in the United States. It is harvested successfully throughout Europe, Russia, China and Canada.

The high demand for bamboo can lead to deforestation to make room for plantations. Bamboo harvesting and processing are often unregulated. Sustainable materials made from soy and Tencel consume large amounts of energy during production.

Washing cotton clothing also requires a large amount of energy. Cotton fabric usually requires more frequent cleaning than other fabrics. A study at Cambridge University found that 60 percent of the emissions generated by a single cotton T-shirt could come from the multiple washes and tumble dryings it would require [source: Cambridge University].

To learn more about organic clothing and organic farming, look over the links on the next page.