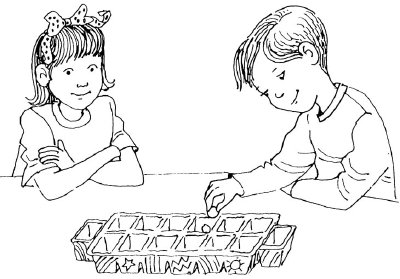 Kids all over the world over love counting games, and this Mankala counting game from Africa is fun for all ages.

How to Play the Mankala Counting Game:

Step 1: Have your children remove the lid from an egg carton, and tape an extra cup (cut from another carton) to each end. These end cups are used as banks, where players store their winnings.

Step 2: Let them use paints and paintbrush to decorate their egg cups if they want, then let the paint dry.

Step 3: Have them put four stones into each cup, but leave the banks empty. The first player starts the game by taking the stones from any cup. Beginning with the next cup and moving counterclockwise, he drops a stone into each cup.

Step 4: Next, he takes the stones from the cup into which his last stone fell. He continues emptying and depositing stones until his last stone falls into an empty ­cup. (The first turn is the only time a turn ends this way.)

Step 6: Players alternate turns until four or fewer stones are left in the carton. The player with the most stones wins.

Keep reading to learn how your kids can create fanciful patterns out of pencils.