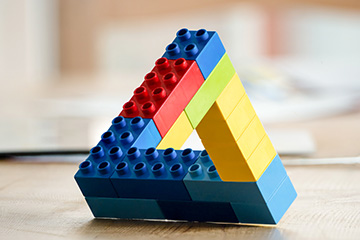 The Penrose triangle is an example of an impossible shape.
Moment Open/Getty Images

Its very name is confusing: "impossible shape." How can any shape be impossible? If someone draws a given shape, then it exists. And yes, it's true that impossible shapes can be drawn. They just can't be created in three dimensions.

Impossible shapes are a type of optical illusion. When we look at a drawing — a two-dimensional image — our brain automatically interprets the pictured item as a three-dimensional object as it tries to make sense of shapes and symbols. But impossible shapes are drawn with spatial inconsistencies that create depth that isn't there — or couldn't be there — in real life. Our brain fights to process drawings that are "incorrect," trying to turn them into something real and understandable. But it can't [sources: BrainDen, New World Encyclopedia].

Even more confused? You're not alone. Let's look at some impossible shapes and how you can draw one. That will help you better understand what they are and how they work.

The Most Famous Impossible Shapes

Four of the most well-known impossible shapes are the Penrose triangle, Penrose stairway, Freemish crate and the impossible trident [source: The Worlds of David Darling]. The Penrose triangle, aka the tribar, is named after physicist Roger Penrose. Penrose didn't create it — that was the work of a Swedish artist named Oscar Reutersvärd, who made it out of a set of cubes in 1934. But after Penrose published a drawing of the triangle in a 1958 article in the British Journal of Psychology, which he co-wrote with his father, Lionel, it became very popular. In 1982, the Penrose triangle appeared on a Swedish postage stamp to honor native son Reutersvärd [source: New World Encyclopedia].

The Penrose stairway is a staircase that makes four 90-degree turns. When you first glance at it, it looks like a staircase that runs in a square. Odd, yes, but still a traditional set of stairs you can climb. But when you look more closely and imagine yourself walking on it, you quickly see no matter how many times you climb the stairs in that square, up or down, you never get any higher or lower — or anywhere, for that matter! The Penrose men also published a drawing of this stairway in their 1958 paper [sources: Harshbarger, BrainDen].

The Freemish crate first appeared in the 1958 lithograph "Belvedere," created by Dutch artist M.C. Escher. A man is sitting on a bench, holding the crate; the bench sits at the base of an enormous structure. The crate is also known as Escher's cube or Hyzer's illusion [source: Wolfram MathWorld].

The impossible trident is known by numerous other names: ambiguous trident, blivet, devil's pitchfork, hole location gauge, Schuster's Conundrum, three-pronged poiuyt, three-legged widget and two-pronged trident [sources: BrainDen, New World Encyclopedia]. The object appears to have three cylindrical prongs when viewed in one manner, but also two rectangular prongs when viewed in another direction. No one knows for sure who invented the blivet. What's known is that it was published in several periodicals (aviation, engineering and science fiction) in May and June of 1964, as well as a 1964 article by D.H. Schuster in the American Journal of Psychology — hence the name "Schuster's Conundrum" [source: New World Encyclopedia].

The Penrose triangle isn't hard to draw. But don't think that means it's a snap to dream up an impossible shape. Roger and Lionel Penrose, who popularized two of the most famous such forms, the Penrose triangle and Penrose staircase, are total eggheads. Dad Lionel was a medical geneticist. Son Roger, a physicist and professor of mathematics at Oxford University in England, was awarded the prestigious Wolf Prize for Physics in 1988 — a prize he shared with none other than Stephen Hawking [source: World of Escher].

How Do I Draw Impossible Shapes?

Admit it. You're dying to try your hand at drawing an impossible shape. That's not surprising. Remember how much fun it was as a kid when someone first showed you how to draw a cube? You'd draw one square, then another one that was half on top of the first, then connect them with diagonal lines. Voilà — a cube!

While there are many complicated impossible shapes that would be difficult for most people to draw, you can use one easy method to create an impossible shape from many common forms: squares, triangles, stars and pentagons. Let's try a triangle [source: Snapguide]:

A step-by-step guide to drawing impossible shapes.
© 2015 HowStuffWorks, a division of Infospace LLC

Use this basic set of instructions to create impossible shapes from other forms. It should be pretty easy. 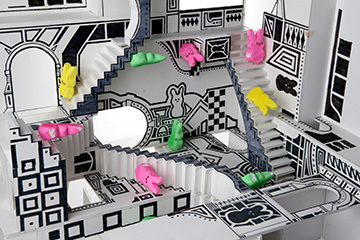 Impossible objects are fascinating. You can study them for long periods of time, tracing their lines, trying to figure out just where the "trick" is that makes them look real, yet unreal, at the same time. No wonder they often inspire artists to re-create them. Probably the most famous artist in the world of impossible constructions is M.C. Escher.

Escher, born in the Netherlands, was a talented graphic artist who produced nearly 450 lithographs, woodcuts and wood engravings during his lifetime, plus more than 2,000 drawings and sketches. He was fascinated with impossible objects, and helped popularize the Penrose triangle, which he incorporated into many of his works. One of these is "Waterfall," a lithograph of a waterway zigzagging uphill and ending in a waterfall. The waterfall actually serves as the short sides of two Penrose triangles, although you don't necessarily realize this unless you're looking for it [sources: New World Encyclopedia, The Worlds of David Darling, M.C. Escher].

Many other artists around the world become enamored of impossible objects. A polished aluminum sculpture version of the Penrose triangle, for example, was created by Brian McKay and Ahmad Abas in 1997; it sits in East Perth, Australia's Claisebrook Square [source: Alexeev]. And don't forget the Penrose triangle was originally created by an artist, the Swede Oscar Reutersvärd.

I remember my excitement as a kid when I first learned how to draw a cube. I'll have to try the Penrose triangle tonight.