How to Host a Texas Hold 'Em Poker Tournament

by Kim Williamson
NEXT PAGE 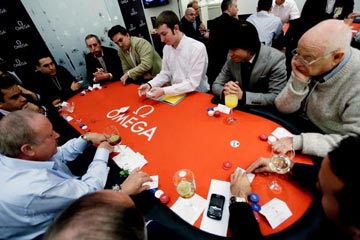 In his song, "The Gambler," legendary country musician Kenny Rogers crooned about a forlorn, lonely man, spouting wisdom about life and poker. Rogers' character had spent his life playing cards, draining him emotionally and physically.

The Gambler never met Chris Moneymaker -- and the last name says it all. In 2003, Moneymaker shocked the gaming world, winning $2.5 million at the World Series of Poker (WSOP) Main Event after paying just forty bucks to get into the tournament -- as an amateur. The success of Moneymaker and other players, combined with WSOP television coverage, has brought poker to the forefront of the gaming world.

Texas Hold 'em, is one of the most popular poker variations today, and according to gaming site, Titanpoker.com, played by more online players than any other poker variation. So, what's the allure?

In other variations of poker, you use five cards to make a good hand, though you're often dealt more. Sometimes you use all five cards, like a full house or a straight, but often, it's just a pair. You bluff, if you're a convincing player; fold if you have zilch. In Hold 'em, you get seven cards, but only two of them are private. Everything else is dealt face-up, in the middle of the table for everyone to "play off." Consequently, bluffing is harder and the game holds more of a challenge.

So, you want in on this gaming craze? Host a tournament! These tips tell you everything you need for a night of holding and folding.