In our opinion, Grace Kelly holds the crown for being the most gorgeous, glamorous celebrity bride ever.
George W. Hales/Stringer/Getty Images

Many of us grab the latest tabloid off store shelves with starry eyes when a new celebrity couple ties the knot -- which glamorous designer did the bride choose to make her dress, and how fabulous was her bling? The world of the rich and famous is mesmerizing on any average day of the year, but it's even more exciting when a celebrity wedding is the topic of conversation.

Starlets not only marry the rockers or actors the rest of us can only fantasize about, but they often have unlimited wedding budgets and multiple designers knocking down their doors at the chance to create their one-of-a-kind wedding day looks, too. What would it be like to have the wedding day of your dreams, complete with an A-list of stylists and designers in tow? Although competition was stiff, we've narrowed down the list of stylish celebrity brides that stand out among the rest. Dripping in diamonds and covered in several yards of ivory chiffon and silk organza, here are 10 gorgeous celebrity brides.

Actress Salma Hayek tied the knot to French businessman François-Henri Pinault on Valentine's Day 2009 in a quiet civil ceremony in Paris, France with only a few close family members present. Later that spring, the couple hosted a lavish reception in Venice at the La Fenice opera house. Despite the gorgeous venue, the bride was the main attraction. Hayek looked ravishing in an ivory Balenciaga wedding gown designed by Nicolas Ghesquiere, complete with a flowing full skirt and delicately embroidered V-neck bodice. The bride accessorized her gown with a bouquet of orchids, stephanotis and crystals and a fingertip-length veil cascading from her sleek updo.

Reality star and fashion designer Nicole Richie married musician Joel Madden in a winter-themed wedding at her father's Beverly Hills mansion in December of 2010. The bride wore three different wedding gowns throughout the event, all designed by Marchesa. The skirt of the gown -- a creation featuring more than 100 yards of hand-draped tulle petals and silk organza -- could be removed to reveal a full-length, figure-hugging dress with intricate lace detailing. The bride's final look of the evening was a slinky, sexy black number draped in black rhinestones -- a dress perfect for a night of dancing and celebrating.

Nicole and Joel asked Marchesa to embroider their names in the lace detailing on one of the gown's sleeves.

Before she was First Lady, Jacqueline Bouvier married future President John F. Kennedy in 1953 in Newport, Rhode Island. A fashion icon in the making, Bouvier looked stunning on her wedding day dressed in an ivory silk taffeta gown designed by Ann Lowe. The dress, believed to have required approximately 50 yards of fabric, featured a portrait necklace and cinched waist. The bride accessorized her dress with an heirloom lace veil she borrowed from her grandmother, rounding out her timeless and romantic wedding day style.

Portia de Rossi looked like a fairy-tale princess when she said "I do" to Ellen DeGeneres.
Gregg DeGuire/FilmMagic/Getty Images

Actress Portia de Rossi married comedian Ellen DeGeneres in 2008 at their Beverly Hills mansion. De Rossi looked like a princess in a sweet gown with a ballerina-inspired light pink tulle skirt designed by Zac Posen. The backless dress showcased the bride's sleek frame, and she wore her hair up off her shoulders in a loose updo, completing her elegant, feminine look.

Stefani donated her dip-dyed wedding gown to the Victoria and Albert Design Museum in London.

Singer Alicia Keys married producer Kasseem David Dean, also known as Swizz Beatz, in the summer of 2010. The mother-to-be looked like a Greek goddess in a modern gown made of ivory silk designed by Vera Wang. Keys wore crystal-encrusted sandals and rhinestone headband draped elegantly across her forehead to complement the intricate jewel detail of the dress's back shoulder. As a finishing touch, the bride carried a bouquet of purple calla lilies to add a bold splash of color to her wedding day ensemble.

Actress Mia Farrow married singer Frank Sinatra in Las Vegas 1966. The bride nixed the idea of a traditional white wedding gown and chose to wear a mod pale minidress instead. She paired her trendy short dress with a cropped, matching jacket with three-quarter length sleeves. Farrow wore her hair in a fashion-forward pixie cut that showcased her delicate facial features, completing her modern and feminine wedding day style.

Farrow was just 21 when she tied the knot with then 50-year-old Frank Sinatra.

This celebrity team certainly had its critics, but no one can fault Katie Holmes for not looking flawless on her big day.
WireImage/Getty Images

Actress Katie Holmes married actor Tom Cruise in November of 2006 in a medieval castle near Rome, Italy. The bride wore an off-the-shoulder ivory gown embroidered with Swarovski crystals and Valenciennes lace designed by the couples' close friend, Giorgio Armani. The stunning dress featured a dropped waistline, a flared, a-line skirt and a train made of ivory silk. Katie accessorized her gown with a floor-length tulle veil and a bouquet of calla lilies wrapped in leaves of steelgrass and galax.

Actress Grace Kelly married Monaco's Prince Rainier in 1956. Her long-sleeved, fitted bodice was studded in seed pearls and made from Brussels lace that was more than a century old! The dress was designed by costume designer Helen Rose and was a parting gift from MGM, Kelly's former movie studio. The ivory peau de soie dress, made by more than three dozen seamstresses over a period of six weeks, was made of 25 yards of silk taffeta and 100 yards of silk net. Kelly's classic wedding day style wouldn't be complete without including something blue, satisfied by the many tiny satin blue bows that covered her petticoats.

Grace Kelly won the 1955 Best Actress Oscar award for her performance in the movie "The Country Girl." 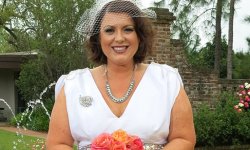 Take a look at this photo album to see all of our style suggestions for the unique and unexpected style bride!