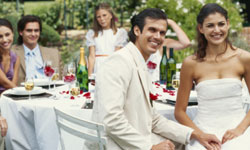 It was a fabulous wedding reception until...
Stockbyte/Thinkstock

Many guests experience a deep sense of anxiety when attending wedding receptions. They have good reason. Besides having to wear shiny, uncomfortable shoes and making small talk with strangers, they'll have to brave a gauntlet of confusing rituals both eye-rollingly corny and socially awkward, from the de-gartering of the bride to the cheesy three-hour photo montage of the happy couple kissing in different locations.

There's hope -- after all, things used to be worse. Traditions die out, which explains why wedding guests no longer have to break loaves of bread over the bride's head for luck or hang around to wait for evidence that the marriage has been consummated. But while there's been progress, we still have a long way to go. Coming up are 10 wedding reception rituals we wish would just go ahead and die already. 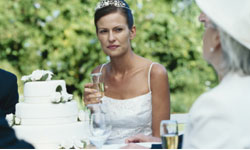 She's worried that cake will end up on her face after the champagne toast.
Stockbyte/Thinkstock

Some see the ritual of the bride or groom smooshing the first piece of cake in the other's face as a playful way to cut a little bit of the tension and the formality of the cake-slicing ceremony. But we think it's a forced, awkward and potentially dress-ruining event. Why not just make the groom pour a bottle of red wine over the bride's dress? Or maybe the bride can hold the groom's head in the punch bowl for a minute or two?

No one knows how cake smooshing got started. Maybe a frisky dab of icing on the nose caught on as a fun tradition. But the result is a recently married couple playing chicken with a dangerously buttery mass of frosting, all while clad in some of the most expensive clothing (and makeup) that they will ever wear in their lives. One slipup means a ruined outfit, hurt feelings and less cake for everyone else. 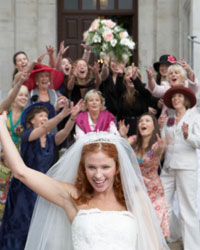 Does anyone really want to catch that thing?
Michael Blann/Digital Vision/Thinkstock

We all knew this was going to make the list. By far the best-established and most-hated wedding reception tradition in the history of the world, the bouquet toss has been the bane of the bridesmaid's existence since prehistoric bridesmaids in matching mammoth skins fought one another for primitive flower arrangements thrown by prehistoric brides.

The problem is that the ceremony is doubly cruel for single ladies. Is it better for them to catch the bouquet or not? What if they came with dates? Too much enthusiasm will make you look like a lunatic, while refusing to play along is a snub to any handsome fellas in the room and could potentially put some bad juju on future romantic prospects. So much pressure! 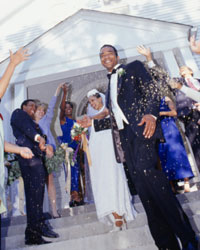 There's nothing quite like being on the receiving end of the rice throw.
Buccina Studios/Photodisc/Thinkstock

We were actually a little cagey about putting this one on the list. It's fun, everyone gets to participate, and pelting the bride and groom is a good way to let off some steam if the salmon at dinner was dry or the registry was too ambitious.

Here's the problem: For years, there's been an urban legend circulating that uncooked rice expands in birds' stomachs and makes them explode like little feathery firecrackers. Is it true? No, but people do believe it, which means dirty looks from passersby and the possibility of flower girls in tears. Not to mention everyone having to pick grains of rice out of their hair for the rest of the day. 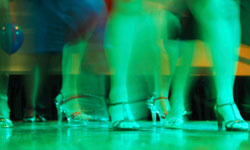 Make no mistake, we at TLC love dancing. Weddings without dancing are like cake without frosting -- dry and boring. But while we are wholly in favor of the shaking of groove thangs by young and old alike, the line has to be drawn somewhere when it comes to worn-out, clichéd group dances. The Macarena should have died out a decade and a half ago, the last Electric Slide should have been performed last in 1982, and the Chicken Dance, which was probably brought to North America in the 11th century by Vikings, has been a groaner for roughly that long.

We'll make an exception for the conga, though. Everybody loves the conga. 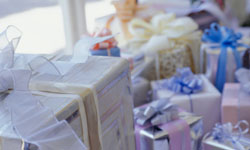 Your guests have already spoiled you -- don't ask them to hand you a wad of cash during the dollar dance.
Buccina Studios/Photodisc/Thinkstock

The dollar dance is a touchy subject. Unlike most of the other items on the list, it's actually a well-established and venerable tradition in many cultures. It's also got a practical side -- weddings often have price tags equivalent to a semester at an Ivy League college. Every little bit of extra cash helps.

Guests have already traveled (in some cases ridiculous distances); rented rooms, cars and cummerbunds; bought the electric potato peeler from the registry and cried their eyes out during the ceremony. After all that, pinning cash to two people who have just pledged to be with each other forever can feel a little, well, vulgar, especially if you don't know the bride or groom all that well. Instead, how about we write the bride and groom a check and leave it on the table next to the many, many bottles of wine we've emptied over the course of the night? 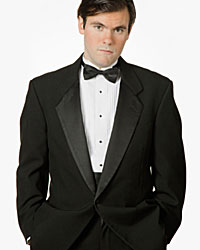 Sorry, Lenny. We're not interested in your photo montage.
iStockphoto/Thinkstock

Just because Cousin Lenny learned PowerPoint doesn't mean that wedding guests need to be subjected to a tender montage of the happy couple's courtship. The reception isn't a business meeting; it's a time to eat, drink and party!

It's not a total faux pas to project pictures of the bride and groom somewhere discreet and unobtrusive, but the guests don't need to see another show after they've made it through the ceremony itself. Everyone has earned their chicken and white wine. Don't ask them to sit through a seemingly endless stream of pictures of people they've already been staring at for an hour while making them listen to acoustic Green Day covers. 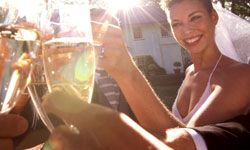 She's smiling now, but after 10 more toasts, she might be a little irritated.
Pixland/Thinkstock

Toasts are great. There's nothing wrong with a good wedding toast; in fact, there are many things right with one that's apropos. A hilarious story from the best man or a poignant endorsement of the bride by the groom's mother -- these make for joyful tears and happy wedding memories.

That said, anyone not in the wedding party who feels it's his or her duty to make an impromptu toast needs to be tackled and carried out of the room. Guests are trying to enjoy their meals, singles are flirting and little kids are trying not to fall asleep. Nothing puts a damper on that like a confused, rambling speech from a distant uncle about how marriage reminds him of his collection of World War I memorabilia. Or worse (though more entertaining), a drunken ex-flame with a bone to pick. 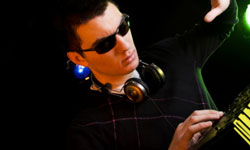 This DJ is trying so hard, but we're just not interested.
iStockphoto/Thinkstock

Oh nutty, overly enthusiastic DJ: We feel for you. We know your bread and butter comes from getting parties started and roofs raised and that all eyes are on you to prove you are more useful than an iPod on shuffle. It's hard, we know. But do you really have to shout like that?

Yelling things like, "All my single ladies get on the dance floor," singling out individual guests to get up and dance, and operating at a level of pumped-up awesomeness far above the rest of the party is a failsafe way to send people running to hide in the restrooms. This is a wedding, DJ. We're not saying we won't dance the YMCA for you, just that we'll do it on our own time. Romance us.

The Elaborate Removal of the Garter 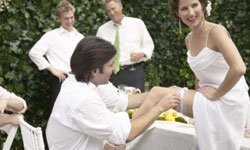 They're happy and oblivious, but what about you, the innocent bystander?
Jupiterimages/Getty Images/Thinkstock

Let's face it. Some aspects of the wedding reception are going to be uncomfortable for bystanders no matter what. Some are sweetly awkward, like the father-daughter dance or table-to-table flirting among groomsmen and bridesmaids. Others, like the garter removal, are just plain disturbing.

Officially, taking off and throwing the garter is akin to the throwing the bouquet -- there should theoretically be a group of handsome superstuds waiting to catch it and be the next to marry. However, this custom is a toned-down throwback from when the groom had to provide proof of consummation on his wedding night. At wedding receptions, a crowd gathers to watch him lustily remove the garter from his bride's thigh (in some traditions with his teeth!). That in and of itself is enough to make everyone in a 20-foot radius back up a step. Yipes. 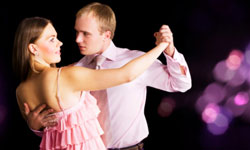 You dumped this guy a year ago, but the bouquet and garter brought you back together for one special dance.
iStockphoto/Thinkstock

If the bride and groom have insisted on throwing the bouquet and the garter, and the guests have been polite enough to participate, the garter-catcher is expected to place it on the bouquet-catcher's leg and claim a dance. There's a certain pleasant symmetry to it. There's also the potential for trauma.

While the idea of bringing together a pair of sweethearts during this event is romantic, fate can have a wicked sense of humor. The situation is ripe for creepy mismatches. Cousins dancing with cousins. Old flames with enemies. Gawky 15-year olds gartering middle-aged aunts while the other guests laugh and clap. It's probably best to skip it and save everyone the nightmares later. 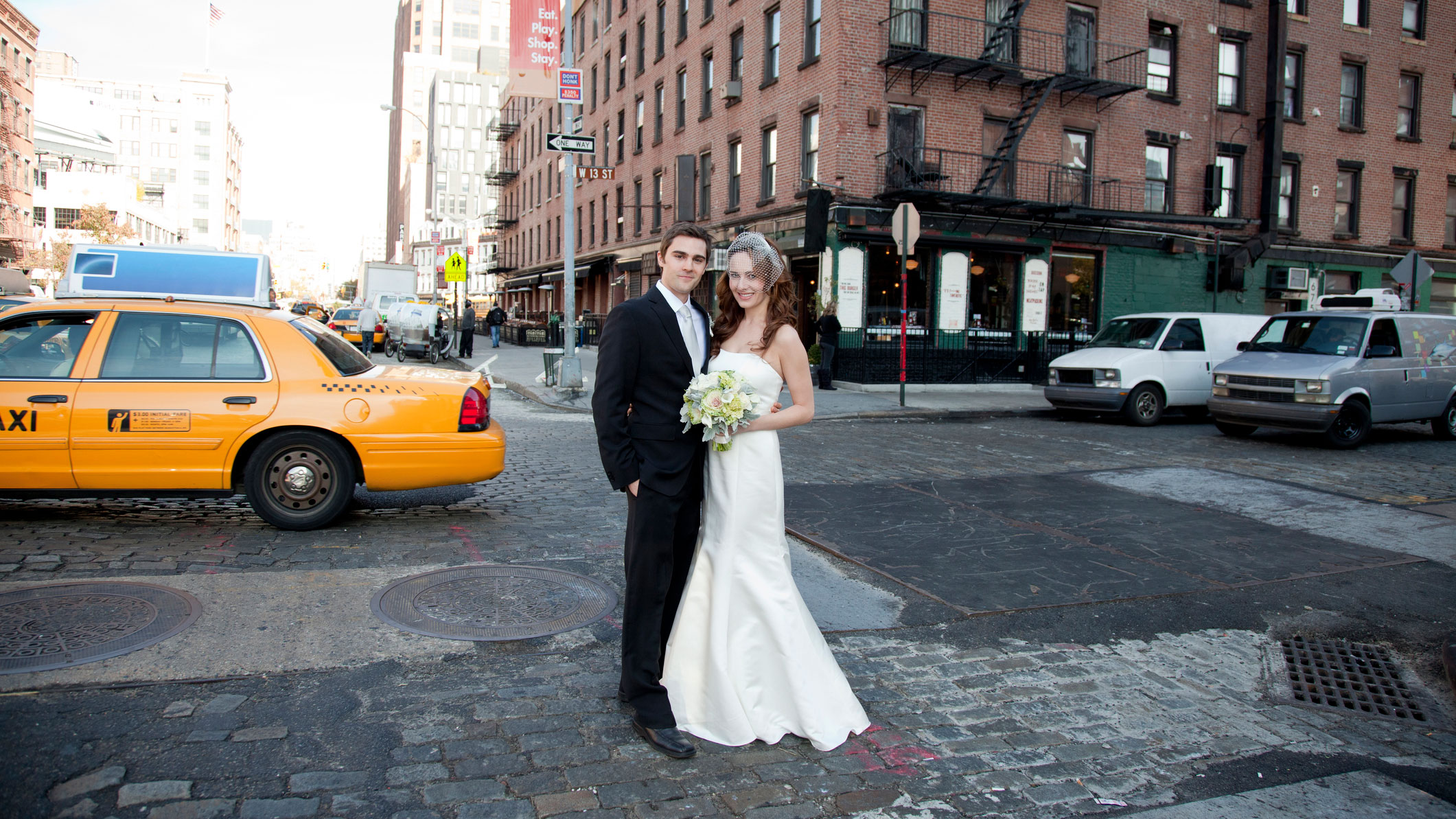