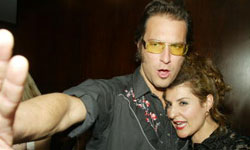 John Corbett and Nia Vardalos attend the after-party of a screening of "My Big, Fat Greek Wedding" in New York.
Todd Plitt/Getty Images

Dowdy, plain Toula (Nia Vardalos) feels like a failure in the eyes of her traditional Greek parents. At 30, she's single and thinks she'll never find a Greek man to settle down with. "My Big, Fat Greek Wedding," released in 2002, is a charming and comedic look into Greek-American culture -- over-the-top stereotypes and all.

Toula's luck changes when she meets shy American Ian Miller (John Corbett), but it's a relationship that her parents have a hard time accepting. After Ian pops the question, Toula's large Greek family begins interfering with every last wedding detail, making the affair all about their ethnic heritage. In the end, the wedding may be big, but we can promise you that the laughs are even bigger.