by Natalie Kilgore
Prev NEXT
3 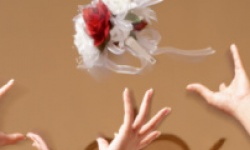 The tossing of the bridal bouquet to ladies hoping to walk down the aisle next may bring out cutthroat competitiveness in bridesmaids who aren’t even athletic.
Creatas/Creatas/Thinkstock

Obstacles bridesmaids try to avoid at a reception might include dodging the groom's frisky uncle, assisting the bride when she has to use the bathroom and drinking too much champagne before the toast. The bouquet toss at the end of the night is an event that most single bridesmaids don't want to miss, especially if they have a competitive streak. And sometimes, as one bridesmaid tells us, the toss is taken a little too seriously, leaving someone trampled in the process.

"I once turned a bouquet toss into an aggressive game of tackle football," the anonymous bridesmaid admits. "When my friend tossed the bouquet over her shoulder, she misjudged her throw, and the flowers headed straight for the 7-year-old flower girl instead." The bridesmaid and the rest of the single ladies lunged forward, landing on top of the small girl who stood in their way. "After we peeled ourselves off the floor, the flower girl was at the bottom of the pile-up, her arm twisted unnaturally beneath her, broken," she cringes.

What started as a friendly free-for-all ended with a frantic ride to the emergency room. "I rushed to the hospital with the flower girl and her mother," she says. "I apologized at least a thousand times, and thankfully, they understood that it was an accident. The flower girl even asked me to sign her cast when the night was over!"