"Reader, I married him." Jane Eye and Mr. Rochester had a romance of epic Victorian proportions.
Bettmann/CORBIS

Every relationship has secrets. For most of us, it's hiding little things, like the fact that we don't care for certain movies, sports teams or foods as much as we say we do (or our partner would like us to). But Jane Eyre's beau Mr. Rochester had a secret wife. Even worse, the original Mrs. Rochester was revealed just before Jane and Rochester say "I do," which caused Jane to hike up her wedding dress and skedaddle.

Now, this might be the kind of thing you would expect to end a relationship, but Charlotte Brontë penned Jane as an intelligent and forgiving woman, so after a year apart (and the passing of his first wife), Eyre agreed to marry Rochester again. The two had a simple ceremony with no guests, or even a formal announcement. But sometimes low-key is good, and at the end of her story 10 years later, Jane and Rochester are still together and madly in love. That's what every bride hopes for, right? 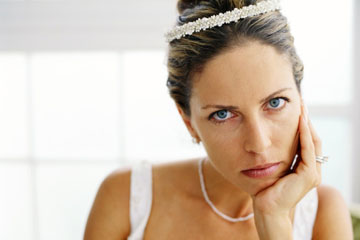 Why do we judge our friends' weddings? Read about wedding criticism at HowStuffWorks.