by Laurie L. Dove
Prev NEXT
3 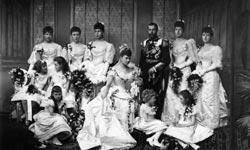 When Lady Diana and Prince Charles wed in 1981, the ceremony included five bridesmaids. Although there's no word on whether Kate will match -- or best -- her late mother-in-law's number of ladies in waiting, we have one teensy request: Let's set a record!

When it comes to weddings with the largest number of bridesmaids, Suresh Joachim and his fiancé, Christa, hold the top spot, according to the Guinness Book of World Records. The couple married in the company of 79 bridesmaids. That's a far cry from the average wedding party, which typically includes five attendants for the bride and groom each.

Or, William and Kate, you could go after the oldest bridesmaid category. The honor currently goes to the late Edith Gulliford. In 2007, at 105, Gulliford was a bridesmaid during a wedding ceremony in Chatham, England, a stand-up that earned her a Guinness World Record for oldest bridesmaid.

Whatever the number Kate settles on, we're sure there's no shortage of takers. Any number of us would love to wear a bridesmaid's gown on this royal wedding day.