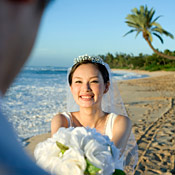 Getting married on the beach, in a castle, or atop a mountain in a foreign country is a dream wedding for a growing number of couples. But getting married in another country also involves some precise planning - not just to make sure the food and flowers are right, but to ensure that the wedding will be legal.

If the country where you plan marry will consider you legally wed, then your marriage will be considered legal in the United States too. But the key word is "legal" and countries have varying, and sometimes confusing, requirements that foreigners must meet before they can be married there.

An increasing number of resort hotels and travel agents are providing wedding packages to popular honeymoon destinations. This is probably the easiest way to plan a destination wedding, as a wedding coordinator can take care of most of the arrangements. But if you're interested in a different kind of wedding overseas, you can make arrangements on your own by researching the country's marriage requirements and contacting the appropriate officials in the area where you plan to marry. A good first step is the Embassy Network, a site that features links to embassies and diplomatic missions in the U.S. and abroad.

Islands in the Caribbean are a popular wedding destination for a growing number of couples from the U.S. and other nations. Many of the islands have a 24-hour waiting period and don't require blood tests. The Carribean Tourism Organization lists the wedding requirements for 32 nations, including fees, waiting period, the documents you must present, number of witnesses needed, and other conditions.

Residency requirements vary throughout the region, from Barbados and the Cayman Islands, where there is no waiting period, to Martinique, which requires a one month residency. In Jamaica, it's 24 hours, while St. Kitts and Nevis require a residency of two working days - not including Saturday and Sunday.

Fees, and how they are paid, also vary widely. Trinidad and Tobago, for instance, require payment in postage stamps. Haiti and Martinique charge no fee, while Grenada charges $15 and Antigua charges $240. Fees are subject to change.

For virtually any wedding abroad, you should be prepared to show a valid passport and birth certificate. If you have been married previously, bring the divorce decree, annulment certificate or death certificate indicating that you are free to marry. Some countries require these documents to be translated into their language and notarized as official copies.

In many countries, you must present an "affidavit of eligibility to marry" in which you testify that there is no reason why the marriage cannot take place. The U.S. does not require this document, so American couples must ask if they can certify their eligibility at the country's consulate in the U.S., or arrange for certification at the American embassy or consulate in the nation where the wedding will take place. Most countries require parental permission if the prospective bride or groom is under age 18, and some may want to see a plane ticket home.

Is the Wedding Legal?

A destination wedding is an exciting alternative to a traditional wedding, and an exhilarating way to start your lives together. But plan carefully, and don't count on U.S. embassy officials to step in in a pinch - American diplomats and consular officers are not permitted to perform marriages.