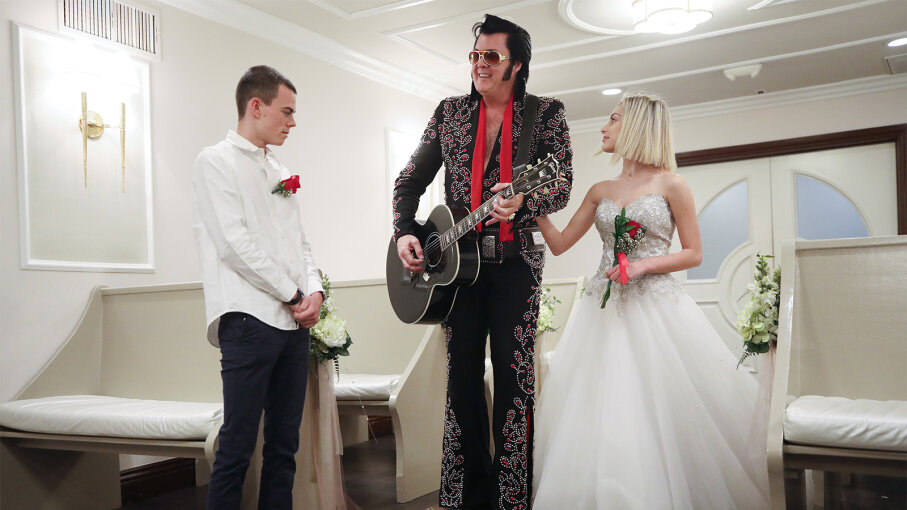 An Elvis impersonator sings for a couple at a wedding chapel in Las Vegas, Nevada. Mario Tama/Getty Images

The act of eloping has been around since at least the 18th century, when English law required couples under the age of 21 to get parental permission for marriage. This prompted young lovers to hightail it for Scotland where no such law existed. By the 20th century, eloping largely meant appearing before a judge for courthouse nuptials.

Today the idea of eloping isn't necessarily a furtive way to tie the knot in secrecy. It's instead become more of a small wedding — often a destination wedding — that may or may not include a few guests.

Following a years-long trend in which the wedding day is becoming more about the couple's experience and less about planning an event to fit a traditional mold, elopement encompasses everything from a spontaneous decision to a well-planned luxury event with photography to match.

While there are no clear-cut statistics about how most marriages begin, there's plenty of anecdotal evidence to indicate more couples are opting to elope than ever before. Popular wedding destinations now offer "elopement packages," often at a fraction of the cost of the nearly $30,000 cost of the average ceremony in the U.S. An entire cottage industry is developing around the idea of providing elopement planning services. Terms, such as "micro-wedding" and "mini-wedding" are popping up on wedding websites and as destination service offerings.

Plus, couples can decide if they want to wed with an audience. Eschewing a guest list or opting for a few close friends or family can mean avoiding often-complicated family dynamics. After all, the whole idea of eloping is to launch your new life as a couple in a way that is both carefree and memorable.

A private marriage ceremony may mean fewer expenses and hassles than its traditional counterpart, and you can focus on starting a life together rather than planning an event. You won't have to spend hours writing thank-you notes or planning a reception so your 200 closest friends can eat, drink and be merry on your dime. However, this doesn't mean that all elopements are done on the cheap.

Elopement can be luxurious, too. Some couples spend $15,000 or more on the destination elopement wedding of their dreams, relying on Instagram-worthy scenery and photos to later give friends and family a glimpse of the occasion. There has been a 128 percent increase on Pinterest, for example, in searches for elopement photography ideas.

Whether or not family and friends are given advance notice of elopement, not being at the ceremony can bring up complicated feelings. Some couples bridge these emotions by hosting a reception at a later date. This compromise offers the new couple chance to create shared memories that were once the purview of a large and traditional wedding ceremony.

Now That's Economical
Between the venue, the flowers, the food, the liquor, the tunes and the wedding attire, wedding costs can add up ridiculously fast, even when you do your best to watch the expenses. If you choose to elope alone or invite only a few close friends and family, you'll end up saving yourself thousands of dollars in the long run.