Browse the article How to Choose Your Maid of Honor 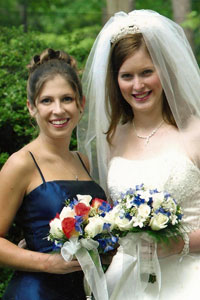 The author with her maid of honor, Heather, who insists that it was a cinch being Alia's MOH.
Photo courtesy Alia Hoyt

She'll be the Monica to your Rachel. The Laverne to your Shirley. The Thelma to your Louise, minus the criminal behavior (we hope) and Brad Pitt (we're sorry to say). The maid of honor you choose directly impacts the success of your wedding, as well as your sanity level leading up to the big event.

Sometimes, your choice for maid of honor is obvious, whether it's your only sister or your best friend since birth. For other brides, the choice can be a serious gray area that must be navigated delicately to avoid hurting feelings or putting someone in an uncomfortable position.

Etiquette standards for selecting your maid of honor have relaxed in recent years. It's now socially acceptable to have co-maids of honor, or even one maid of honor and one matron of honor. But take the time to think over your options before you make a decision about who will be joining you at the altar.

Keep It in the Family?

Most etiquette guides say that the sister nearest in age to you should be your maid of honor. If you're close to your sis and she's responsible enough to handle the role, you can call it a day and move on to the cake-testing sessions!

If your sister is much younger than you or isn't particularly responsible, your decision isn't quite so clear-cut. Some brides aren't all that close with their sister(s) and would feel more comfortable asking a friend to fill the role. If you're planning to bypass sis, talk to her about it first. Chances are she'll understand, but you should be sure to include her as a bridesmaid.

Just because you don't have a sister doesn't mean that a family member can't serve as your maid of honor. Although we'd advise against dressing your brother in high heels and satin, it's become much more common to see men stand up on behalf of the bride. If your brother is already serving as a groomsman, you can always turn to a female cousin you're close to, or even ask your future sister-in-law to step in. Don't feel obligated to ask your fiancé's sister to be your maid of honor, although you should at least consider asking her to be a bridesmaid.

Choosing a non-family member to be your maid of honor? Don't forget to tell your parents! Neglecting to mention important details like this one to Mom is the quickest way to start a family squabble.

Or Tap a Friend for the Role?

Maybe you have three friends chomping at the bit to be your maid of honor. Or perhaps they're all hoping you'll pick someone else! Either way, most of us have more friends than sisters, so the pool of candidates is certainly larger. In fact, many brides are now turning to male best friends to fill the traditionally feminine role.

If you're torn between two friends, you should take into consideration which one will get the biggest kick out of planning the bridal shower and bachelorette party as well as taking on other responsibilities that come with the title.

Most importantly, don't make the assumption that just because you ask she'll definitely accept the position. Women can decline the role for any number of reasons, ranging from financial to emotional, which brings us to our next point.

Christine* (*name has been changed to avoid de-friending by the bride) from Memphis, Tenn., was given fabric and a dress pattern by the bride and told to make her own dress. She was also instructed to check all of the groomsmen's mouths for gum before the ceremony, along with many other demoralizing tasks. Christine, who's getting ready to be maid of honor in another wedding, is keeping her fingers crossed that her tasks will be less ridiculous this time around. 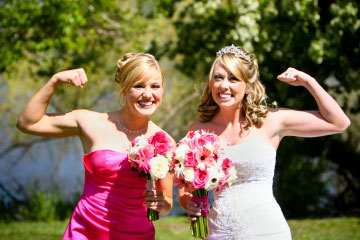 Choose a maid of honor who can bear the weight of countless responsibilities.
©iStockphoto.com/TriggerPhoto

Being someone's maid of honor is akin to taking on a part-time job. That is, a job that doesn't pay anything and actually costs money. The position often comes with a lot of drama, which even some really great friends would rather not deal with. If you have an inkling that your front-runner belongs in that category, it might be best to make her a bridesmaid instead.

Debbie Downers aside, let's say that you have two or three friends who would be truly honored to serve as your maid of honor. At this point, you should consider each person's "maid of honor" qualities to determine who's best suited for the role. If one of the candidates is well-meaning, but disorganized and chronically late to events, whereas the other friend is type-A to the extreme and loves hosting parties, your choice is pretty obvious. After all, it's vital to choose someone who can reliably perform all of her required duties.

We don't mean to sound impersonal. After all, the maid of honor is also your go-to person for emotional support, and she'll be helping you make some tough decisions, too. Take your friends' personalities into consideration. A strong personality might overshadow your wishes. By the same token, a passive, shy friend might never give you an honest answer.

Whoever you choose, be sensitive to the "runner-up" to avoid or minimize hurt feelings. If choosing between friends is impossible, you can always gauge their opinions about being co-maids of honor.

It's a story that's growing old and tired, but it's no less real: The economy is down, the housing market is in shambles, and your No.1 choice for maid of honor was recently laid off from her job.

Can't see proceeding with anyone else by your side? Ask your friend, but be sensitive to her financial concerns. Insist on simple hors d'oeuvres and a homemade cake for your bridal shower. You might offer to cover the cost of her gown and alterations as a thank-you for all of her hard work and generosity. Just be sure not to seem patronizing when you offer financial help. Pride is easily damaged, especially when it comes to money matters.

If you've never been pregnant before, it's virtually impossible to imagine the toll that childbearing and birth take on a woman's body and psyche. Pregnant women often feel clumsy, out of sorts and downright unattractive (even if the rest of us think they're beautiful). Women recovering from recent childbirth (six to eight weeks post-partum) are often in a fair amount of pain, plus they can't fit into any of their pre-pregnancy clothes by a long shot.

So, if you've agonized over appointing your maid of honor only to discover a few weeks later that she's pregnant, be the bigger person and ask if she wants to step down from her role. Trust us, nine times out of 10, the last thing a hugely pregnant woman wants to do is waddle down the aisle in front of a few hundred people. Most new mommies would agree that flabby midsections and leaky breasts are not the characteristics of a happy or comfortable honor attendant.

And if babies are on your eventual to-do list, you'll understand someday and pat yourself on the back for making the offer, even if she doesn't take you up on it. Who knows? Maybe she'll remember your kindness when she's picking names or reading "How to Choose Your Baby's Godmother."

Women who are eight months pregnant aren't comfortable in 4-inch heels. Just ask Danielle from Savannah, Ga., who, weeks before giving birth, served as maid of honor -- in stilettos. She endured the discomfort for a dear friend's wedding, but admits that bending over to straighten the bride's train wasn't an easy or graceful feat.