by Natalie Kilgore
Prev NEXT
4 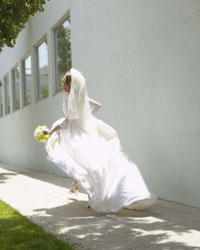 Yes, some brides really do change their minds at the last minute.
Jupiterimages/Comstock/Thinkstock

Julia Roberts stars in this romantic comedy as Maggie Carpenter, a woman who's infamous in her small town for leaving several fiancés at the altar. When reporter Ike, played by Richard Gere, is assigned to write a story about the runaway bride, the two begin to fall for each other, but neither are convinced that Carpenter will ever be able to tie the knot for good.

What if the bride confides in you that she can't stay in a white dress long enough to say "I do"? As a bridesmaid, it's your job to find out if the bride's reluctance is legitimate or just a case of pre-wedding jitters. If a bride is serious about calling her engagement off, a bridesmaid should be supportive and do anything she can to help -- even if this means standing up in front of a church and breaking the news to a congregation yourself.