by Natalie Kilgore
Prev NEXT
10 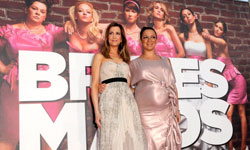 The stars of "Bridesmaids," Kristen Wiig and Maya Rudolph, pose for pictures before the premiere of the movie.
Michael Caulfield/WireImage/Getty Images

What can happen when a hopelessly broke woman agrees to be a maid of honor without knowing anything about what the role entails? In "Bridesmaids," this situation leads to a string of hilarious worst-case scenarios, including a dress fitting fiasco and a bachelorette party blunder. Annie, played by Saturday Night Live star Kristen Wiig, eventually gets bumped from maid of honor to bridesmaid when wedding planning proves too stressful, putting a serious strain on her relationship with the bride.

This movie is relatable to girls who are asked to be a bridesmaid when money is tight, whether they're clueless about the role's responsibilities or not. It's not uncommon for true friendships to be tested in the days leading up to the wedding, so if you start to feel overwhelmed by mounting expenses and duties, be honest with the bride. And if times are tough and you can't afford to be a bridesmaid, it's perfectly acceptable to decline the invitation from the beginning.