Browse the article Should you expect a proposal on Valentine's Day? 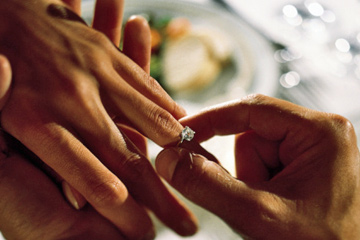 Expecting a ring? It could be coming on a very romantic holiday!
Comstock/Thinkstock

Valentine's Day is fast approaching and your special pal is looking distracted. Does that glazed expression mean there's a ring in your future, or is it just indigestion? You've thought about it, dreamed about it, planned for it and stressed over it. Will Valentine's Day be a long-awaited breakthrough or a bust? We have some hints about how you can tell if you should get a mani-pedi in preparation for the big moment, or just make sure there's plenty of room on the coffee table for another box of chocolates.

St. Valentine's Day is bursting with life changing potential -- if everything comes together the way it should. Is he seriously courting you with an eye toward that big bended knee moment, or is this another false start?

If you're not expecting a marriage proposal on Valentine's Day, don't feel too badly. There's always Easter and Independence Day on the horizon, then Halloween, Thanksgiving and Christmas. Enjoy the chocolates, and hold the good thought. As of 2009, there were over 3,375 nut and confectionary stores in the U.S. They need love, too.

20 Signs a Ring Will Grace Your Finger This Year

Here are some subtle and not-so-subtle ways you can tell if this is going to be your year:

The signs are subtle, but you'll probably have a sixth sense feeling that will alert you anyway. Put a few of these subtle signals together, and you may be looking at a Valentine's Day worthy of a big celebration. Once you've made the transition from being a playmate to a helpmeet -- that's an old timey word for a partner -- a St. Valentine's Day proposal will be the icing on the cake.

If you still have doubts about the institution of marriage, consider a 2006 Pew Research Study that reflects the observations of many psychologists: It found that 43 percent of married respondents felt they were "very happy." On the single side, only 24 percent of responders could make the same claim.