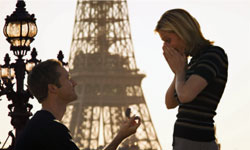 If he proposes in Paris, remember to say "oui" instead of "yes." See pictures of diamond engagement rings.
Photodisc/Thinkstock

Guys, if you've been thinking about proposing but can't seem to think of the right way to pop the question, you're not alone. Most men agonize over this, and we sympathize -- today's media is flooded with countless extravagant, creative tales that have set the bar incredibly high. And even though the story of how you proposed will be repeated for decades to come, try not to feel too much pressure. As long as she says yes, that's all that matters! A wedding proposal should be personal and meaningful, but you don't have to jump through hoops to make the moment special.

Luckily for you, the rain showers of spring have finally shifted to summer, a season full of romantic possibilities, whether you prefer to spend the warm months parasailing along the coast or hiking the Appalachian Trail. If you're searching for ideas or simply enjoy reading heartfelt, dreamy engagement stories, here are 10 summer proposals that'll make you melt! 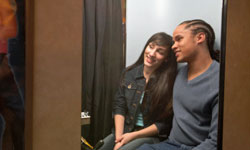 We absolutely love the idea of a photo booth proposal!
Jack Hollingsworth/Thinkstock

During the summer, photo booths seem to be everywhere. Besides the mall, they can be spotted at carnivals, boardwalks and almost any establishment within walking distance of the beach. If you and your girlfriend can't resist popping into a photo booth for a few silly pictures (or the chance to steal a private kiss in front of the lens), this is the perfect place to ask her to marry you.

Once you cram yourselves inside the photo booth, prepare for the big moment. As the camera counts down to your first shot, take the ring box out of your pocket and present it to your girlfriend. Remember that booths snap pictures quickly, so act fast! Your proposal -- and her surprised reaction -- will be forever captured in a strip of black and white pictures. You'll both always be thankful that you have photo documentation of the memorable day you agreed to spend the rest of your lives together.

On a hot July evening in 2009 in New York City, Jake Bronstein set the world record for the longest whisper chain, passing a message through 59 people at Crash Mansion on the Lower East Side.

If you ask us, the message Bronstein sent was definitely more exciting than the Guinness World Record he set for doing so. He whispered, "Will you marry me?" to the first person in the chain, and the question made its way around the room in the direction of Bronstein's longtime girlfriend, Kristina Hoge. The second to last messenger whispered the words into Kristina's ear, and the moment she realized the message was for her, she turned around to see Jake on one knee. The crowd cheered, and Kristina said yes!

Every guy feels the jitters before asking a woman to be his wife. If you're having an exceptionally hard time deciding how you'll muster the strength to ask the million-dollar question, consider writing the message, instead.

Does your girlfriend keep a journal? If so, use it as a proposal prop. Decide when you want to pop the question, flip to the dated page and write her a message. Of course, you want to make sure you're present when she reads this very special journal entry! Plan a romantic picnic for the big day, and tuck the ring box in a basket among fresh strawberries, a chilled bottle of champagne and the journal. Bonus points if you add a meaningful poem to the dated entry before she reads the four exciting, life-changing words at the end of the page: "Will you marry me?"

Need help planning a romantic picnic for your proposal? TLC has you covered with picnic tips so sweet that you and your partner will fall in love all over again!

A Proposal Over Coffee

Sharing a cup of coffee is a popular pastime for the average couple. It's a great chance to relax together and catch up on the day's events. If you and your girl are coffee lovers, a coffee shop is an unexpected place for you to pop the question.

We don't recommend proposing over a basic cup of black coffee. Spice it up! Various online retailers make edible stencil letters that spell out "Marry Me" in latte or cappuccino foam. Give them discreetly to a barista (along with a generous tip) at your local coffeehouse for a proposal surprise. Other retailers sell coffee cups that pop the question for you with "Marry Me?" revealed at the bottom of an empty mug. If you're crafty, make your own cup at a do-it-yourself ceramics studio. Proposing in front of strangers and coffee shop employees isn't for everyone, so feel free to bend down on one knee in the privacy of your very own kitchen. We guarantee that she'll appreciate the time and thought you've put into making the big moment extra special.

Parasailing is a popular beach activity for the adventurous couple. A boat can easily tow two people, so hop aboard and enjoy a romantic ride through the air. There's nothing quite like sharing a private view of the shoreline hundreds of feet above the ocean waves, so why not make the ride even more memorable with a mid-air engagement?

Before you board the boat, brief the captain on your proposal plan -- he might even let the ride last a little longer than usual. As you ascend, hold on tightly to your swim trunk pockets; you don't want the ring to plunge into the choppy waters below. After you finally adjust to the altitude, you'll want a minute to take a deep breath and calm your nerves. Even though it's impossible for you to get down on one knee during your proposal in the sky, your girl is sure to remember this extraordinary ride for the rest of her life.

Pierre-Marcel Lemoigne invented the first parachutes used for parasailing in 1961.

A Proposal in the Great Outdoors 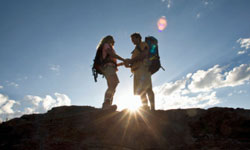 Popping the question on a mountaintop is incredibly romantic.
Comstock Images/Thinkstock

If you and your girlfriend love spending time outside, devise an elaborate scheme to propose against one of Mother Nature's many gorgeous backdrops. Hike together to the summit of a mountain and propose at dizzying heights, or if you enjoy camping, pop the question after reminiscing around a campfire late at night.

No matter where you decide to get engaged, add a few thoughtful touches to the surrounding landscape to make the occasion even more memorable. Hang battery-powered tea lights from the branches of a big tree to set the mood. Wait for dusk to arrive, and in the midst of 100 twinkling lights, ask your girlfriend to be your wife.

The Brooklyn Bridge is a world-famous structure and undoubtedly a prime proposal spot for many couples year after year. However, one story stands out among all the rest. Craig, a hopeless romantic, wanted to add a bit of drama to the minutes leading up to his marriage proposal. He recruited his sister and closest friends to wait at the opposite end of the Brooklyn Bridge, holding giant pink balloons and handwritten love notes. As Craig and his girlfriend, Torie, started walking across the crowded bridge, his sister and friends handed the balloons and notes to strangers walking toward the couple. As strangers passed along the tokens to Torie, her hands soon filled up with a bouquet of pink balloons. When Craig asked her to marry him, she said yes!

If you want to catch the big moment on film, have a friend or professional snap photos in disguise from afar.

Usually, we'd advise against hiding rings in food or in a glass of champagne -- the idea of chipping a tooth or accidentally swallowing the ring makes us shudder.

That said, the idea of hiding an engagement ring in food doesn't have to be ruled out entirely – there are a few ways to conceal the ring in a way that's disaster-proof. Take real-life couple Linn and Annie, who have a unique proposal story involving her love for chewy fruit candies. Linn wanted his marriage proposal to be a surprise, so he devised a clever plan. With careful precision, he used a razor blade and glue stick to place a miniature box with a diamond ring in the packaging. When he gave the candy to Annie, it looked as if it had never been opened. When she discovered the tiny box, Linn dropped to one knee and proposed. Needless to say, Annie was definitely surprised, and she said yes! 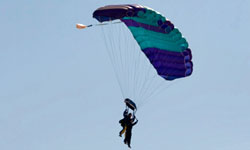 An engagement this extreme is one you'll remember forever!
iStockphoto/Thinkstock

Are you and your girlfriend adrenaline junkies? If you think jumping out of a plane at 2,000 feet sounds like a great date, popping the question under extreme circumstances is the way to go.

Present her with a diamond ring and "Will you marry me?" scrawled across an underwater writing tablet while scuba diving off the coast of a tropical island, or propose when you reach the top of a cliff after a long day of competitive rock climbing. If you're really daring, get down on one knee before you and your girlfriend fasten bungee harnesses to plunge into the unknown. Once your girl inevitably says yes, take a leap of faith together and experience a mixture of emotions that will result in an all-time natural high.

A Casual Proposal -- With a Surprise Engagement Party

Proposing in front of a crowd can seem impersonal -- there's no such thing as a private moment when your mother is right behind you with a camera. Besides, the thought of everyone staring at you while you're on one knee, waiting for a yes or a no, would make anyone break out in a cold sweat. But if you'd still like family and friends to be on standby for an impromptu engagement celebration, the feat can still be accomplished. You just have to plan accordingly. 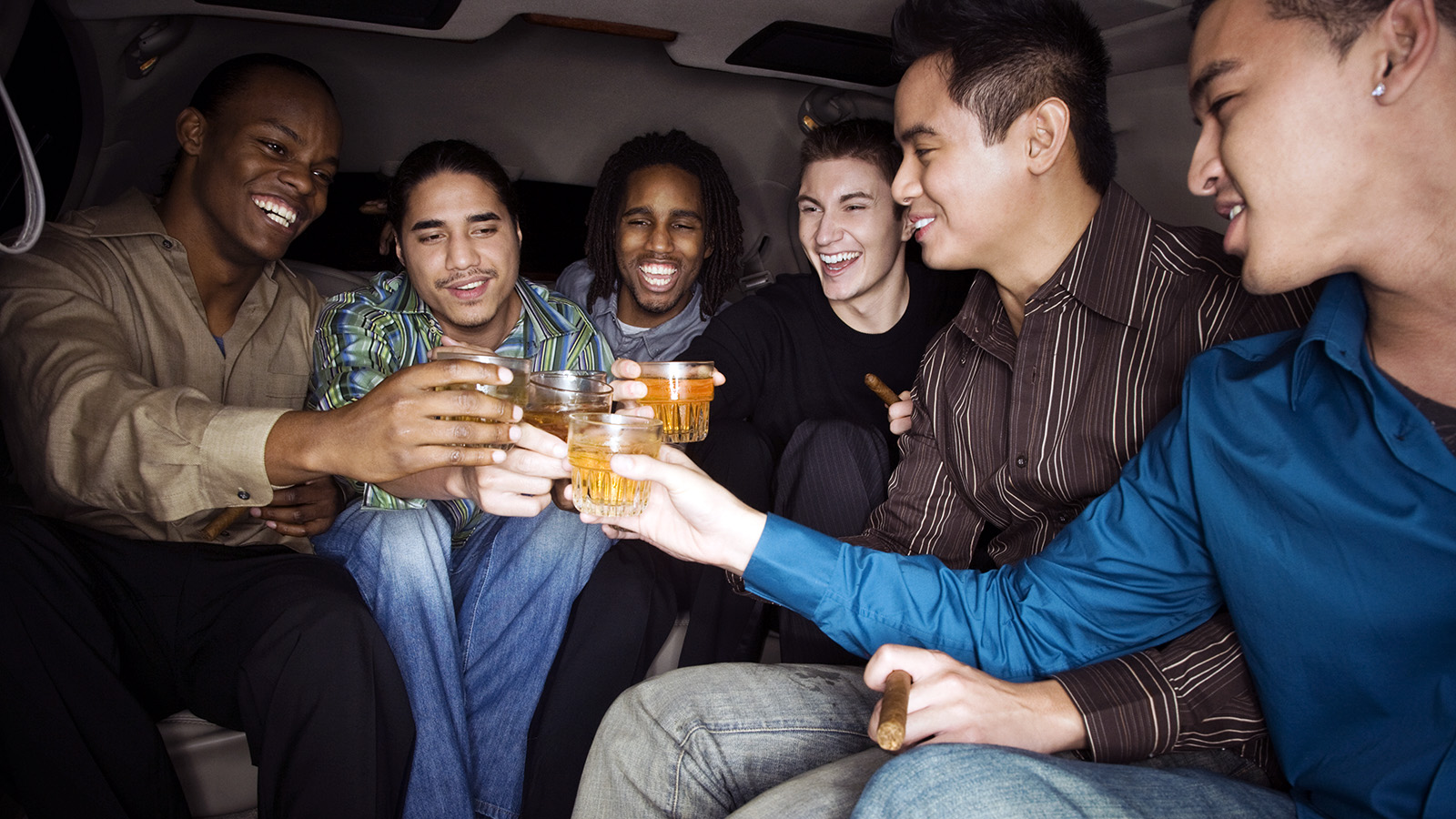