by Sara Elliott
Prev NEXT
3

Play Down Your Feminine Side 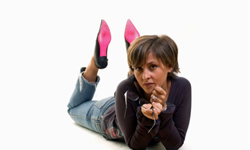 She's got it all: the skinny jeans, T-shirt, glasses -- and an unexpected pop of pink on her feminine shoes.
iStockphoto/Thinkstock

The hipster look was originally pretty androgynous, but that's becoming less of a component of the trend. Girly touches are still somewhat subtle unless they're added as an unexpected or ironic counterpoint. Some retro blouses and skirts using large scale prints and other vintage patterns are considered hipster but still give off a feminine vibe. They will usually be paired with leather or denim to counterbalance the frilly effect, though. To keep things from becoming too stark and somber, delicate flowered headbands, intricate jewelry and brightly colored nail polish are popular. Feminine lingerie is popular, too -- probably because it's so unexpected.