Browse the article What is high-definition makeup? 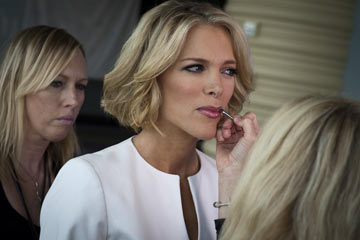 The launch of high-definition television was phenomenally exciting. Look at the detail on those flowers! That action sequence is amazing! OMG, what is that thing on that actress' nose? Yes, HDTV (high-definition TV) leaves nothing to the imagination, so when it launched in the last decade, it caused actors and news anchors to clamor for a miracle product to render them perfect in the eyes of the public once more. Regular people don't exactly love their fine lines, crow's feet, moles and scars, so celebs sure aren't going to be wild about these flaws popping up enlarged in front of the masses.

One interesting conundrum is that since HD broadcasts at a much greater resolution than regular old TV, it doesn't just show people's flaws; it also shows the makeup used to cover them up, which creates a whole new slew of issues for makeup artists and TV personalities. After the launch of high-def technology, enterprising cosmetics companies quickly realized the need for a whole new class of makeup that could cover without looking mask-like. Hence, HD makeup products were born. Lots of professional makeup artists use a technique on their celeb clientele called "airbrushing" in which the makeup is actually sprayed onto the subject's face, rather than applied with a sponge or brush. Most of us don't have the big bucks to fund that luxury, though, so many people turned to store-bought HD cosmetics to get the job done.

The best high definition foundations hide everything, but don't give you that pancake-y look. The foundations are sheer while still managing to cover up flaws. They usually contain reflective particles like mica, quartz, crystals or silicone, which diffuse light to mask imperfections. These products are also usually oil-free to avoid a greasy appearance. HD face powders are ground much more finely than the regular variety, so that the camera won't be able to pick them up.

Chances are, unless you're a runway model, TV journalist, actor or being inexplicably pursued by annoying paparazzi, you don't need to worry about fitting HD makeup into your daily cosmetics regimen. However, anytime you're being professionally photographed, for a family portrait, engagement, or professional head shot, HD makeup could help you look your best.

High-definition makeup is available at higher-end beauty and department stores. As with most potentially pricey cosmetics, it's probably worth your time to sit down at a store that'll let you test the products before making the purchase. Keep in mind, that a lot of the ingredients in this type of makeup are also featured in other wrinkle-concealing and mattifying products. So you may want to try those first to save some money.