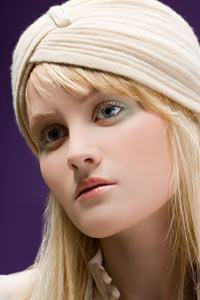 The modern version of the '70s look is soft and dewy.
©Imagesource/Thinkstock

The styles of the late 1960s spilled over into the early '70s, and many women continued to wear a natural makeup look at the beginning of the decade. The girl-next door makeup style emphasized flawless healthy skin, rosy cheeks and shiny pink or nude lips. Eye makeup was kept soft, as well, with subdued eye shadow and liner colors. Women wearing this look tended to style their hair like Marcia Brady (long, straight and parted down the middle), or as the decade went on, in the hot-roller-styled, feathered Farrah 'do (the popularity of the Farrah hairstyle in the late '70s was just as popular as the Rachel hairstyle in the '90s). By the end of the '70s the girl-next-door look had gotten a little tanner, a little sexier -- and a little more feathered.

But that's only the half of it. In addition to the sexy, girl-next-door style and natural makeup look, music and the culture surrounding it was also influencing cosmetic trends in the '70s. This was the '70s, after all, and the '70s gave us disco.

Disco wasn't just a style of music in the mid-and-late '70s; it was a lifestyle. Women who were part of the disco scene -- or who wanted to be part of the scene -- stole their look from models such as Bianca Jagger and Jerry Hall and other of-the-moment insiders on the scene at hot-spot Studio 54. The tanned, golden look was in, a look of leisure and expensive lifestyle, and dancing queens were not shy about applying bronzer to achieve that sun-kissed glow. Peachy blushes were applied with a heavy hand and highlighting makeup was liberally used. Disco lips were brightly colored and shimmering, and smoky eye makeup, often in shades of gold, silver or blue, completed the lurex-and-leotard look.

Also happening in the '70s was the glam rock scene, where artists such as David Bowie, Johnny Thunders and David Johansen let androgyny, glitter and black lipstick influence their theatrical makeup looks.

What is high-definition makeup?
Bow Lips and Bold Eyes: Secrets of the '20s Makeup Look
How to Use Metallic Finish Makeup