Cat Eyes and Color: Secrets of the '60s Makeup Look 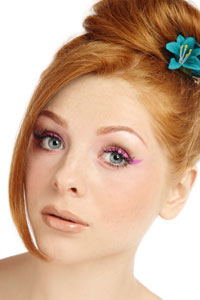 For a modern twist on the '60s cat eye, try it in a color other than black.
©iStockphoto/Thinkstock

Be honest. You've coveted the '60s makeup look ever since you got hooked on watching "Mad Men."

The decade of the 1960s gave us Twiggy in a miniskirt, the first lady's pillbox hat, Mia Farrow's super short hair, mods and hippies. Hair spanned great lengths, and popular styles included voluminous, teased hair, afros, long and straight hair (the hippie look) as well as hair trimmed short in the shape of a pixie cut.

But it wasn't just the hairstyle that framed the face.

If there's one thing you take away about the '60s look, let it be this: Don't be shy about the eyes. The eyes were the No. 1 focus throughout '60s style. Elizabeth Taylor starred as Cleopatra in the early '60s, and her queen of the Nile eyes had an impact on makeup trends across the United States. American women preferred their eyes dramatically made up, and colorful eye shadows -- including bold blues and greens -- black liquid eye liners and false eyelashes (which first became popular in the '60s) were all part of a well-stocked make-up kit. Eyes were completely lined in black, with lines swooping out from the eye, toward the temple (the ultimate cat-eye). And eye shadows were applied with a heavy hand, from lashes to brows. Eyebrows were full, dark and extended, with strong, emphasized arches.

In addition to the Cleopatra-inspired look, Twiggy, Edie Sedgwick and the mod scene influenced American makeup trends with dramatic Bambi eyes and pale, matte or nude lips. Reds and dark lipsticks were passé throughout the decade, except for during the very early '60s, but consider that a little style spillover from the '50s. In the late 1950s, titanium was introduced into makeup, creating pearly, shimmering lipsticks and nail polishes. These pearly pinks and peaches gained popularity in the '60s. Translucent makeup powders were also introduced during this time, and Max Factor's pancake makeup continued to be popular in the '60s as well. Faces were, as in the 1950s, flawless and matte.

By the end of the decade, the natural look was beginning to gain popularity, especially in the young, hippie generation. This natural look focused on soft colors, healthy golden skin and flushed cheeks, and became one of the defining looks of the 1970s.

Clean Out Your Makeup, Like Right Now!
A Cruelty-free Alternative: Vegan Makeup Brushes
Tools You'll Want to Bring to the Salon