'I Would Never Say That I Model as a Man': Androgynous Models Clear the Air

by Julia Layton Mar 9, 2016
Cross-gender model Rain Dove has been known to shrug into both menswear and womenswear with ease. Kelli Bettoney from Bettoney Photography

Jaden Smith is wearing women's clothing, and he doesn't look half bad.

Fashion house Louis Vuitton announced in January that Smith, the 17-year-old actor son of actors Will Smith and Jada Pinkett Smith, is one of the new faces of LV's womenswear line. The brand posted a photo from the ad campaign on Instagram, and sure enough, there's Smith, along with three female models, posing in a skirt from the spring/summer women's collection.

The strangest thing about the image might be that it seems kind of normal. Smith looks utterly at ease. He looks pretty good. Granted, Vanity Fair once said he might be "the most brilliantly avant-garde celebrity offspring this Earth has ever known," so presumably he can pull off a lot. But this isn't about Jaden Smith.

Androgynous modeling is having a moment.

Last year, the creative director of Acne Studios cast his son in ads for its fall 2015 women's line, with the 11-year-old rocking a long pink coat, high-heel boots and a black handbag. In 2012, female Casey Legler signed with Ford Models' men's division, a likely first for the industry. Male model Stav Strashko is with the women's division of One Management. Rain Dove and Elliott Sailors, both women, are versatile: They currently model menswear and womenswear. It just depends on the day.

And then there's Andrej Pejic. In 2010, the then-male model solidified a lucrative career in womenswear when he walked the runway in a sheer, Jean Paul Gaultier wedding gown at Paris Fashion Week. By 2011, ABC News reports, Pejic was earning women's rates — in modeling, about three times higher than men's.

Not everyone approved of Pejic's success. Some critics accused designers of using the model as a vehicle to finally rid women's fashion of women's bodies. Amanda Platell wrote in the Daily Mail in 2011 that Pejic's career was "an act of abject misogyny."

Then again, Pejic is mind-blowingly stunning. So it could be that, too.

Pejic came out as transgender in 2014 after undergoing sex-reassignment surgery, ending a career as an "androgynous male model" and beginning one as a "transgender female model."

It was Pejic's early work that initially inspired Elliott Sailors to venture into cross-gender modeling. She found it required scissors.

"I first pursued menswear with my long blonde hair, but without much success," writes Sailors in an email. So, in 2012, she chopped it off. It's all on video. Some applauded. Many gasped. Slate writer Katy Waldman accused Sailors, then 31, of exploiting a gender-bending fad to prolong her modeling career.

As if Sailors were breaking new ground.

Not Exactly a Fad

The fashion industry challenges gender norms as a matter of course. Elle calls it a "continuing obsession with androgyny." In the '20s, Coco Chanel decided women should finally wear pants — in casual settings, anyway. Yves Saint Laurent created the woman's tuxedo in 1966, when women were still regularly turned away from fancy hotels and restaurants for wearing anything other than skirts or dresses.

The Atlantic reports that unisex clothing exploded, and then died, in 1968. The many department stores that set up unisex departments seem to have misjudged that one.

Avant-garde idol Alexander McQueen put men and women on the same runway in the late '90s, seamlessly modeling their respective collections (as artificial rain fell from somewhere). Dior Homme feminized the men's aesthetic in the early 2000s, described by academic Nick Rees-Roberts, in a 2013 article in the journal Fashion Theory, as a "conscious reworking of masculinity, replacing virile men with skinny boys" in sleek, slim-fitting clothes. We've yet to see that shift fade.

It's Gender, Not Sex

And Sailors says they regularly get it wrong.

"I would never say that I model as a man," she writes, "— in fact it's one of those things I've done my best to correct when others put it that way. I say that I model menswear (and womenswear)."

Maybe people are confusing gender with sex. Sex is a biological determination. Gender is a sociocultural one. When Sailors models menswear, she's not pretending she's a man. She's portraying a men's gender aesthetic in a different light.

Gender is more complicated and malleable than sex, and androgynous models may know this better than most. Their success relies in part on the ability to cross the boundary between two very distinct sets of visual expectations — and it's not just about a haircut.

Sailors says her physical traits, which she refers to as "androgynous and also gender-fluid," allow her to move between Western ideas of what attractive men and women are supposed to look like.

"I can appear to have both feminine and masculine qualities simultaneously, or one or the other," she explains.

Pejic (left in blue), along with Emmy Rossum and Ireland Baldwin, attend a fashion gala in NYC in 2013.
D Dipasupal/Getty Images

For model Rain Dove, , achieving a traditionally masculine aesthetic can feel like less of a stretch.

"When I wear 'menswear,' I often feel more comfortable because the expectations of what makes a 'male' model appear sexy [are] much less," she writes in an email. "They simply have to be confident, comfortable, or strong ."

She says female models are expected to be alluring, delicate, and often sexually inviting."

"Many times when I put on 'women's wear,' my muscle tone and determination to be comfortable instead of contorted can really put people off," Dove says, adding, "I think it's important for people to see 'females' in roles where they are as casual, confident, and strong as their 'male' counterparts."

Dove's use of quotation marks says a lot. To deny the sociopolitical implications of cross-gender modelling is a tough sell in an era when Target phases out gender labels, women's colleges adjust admissions policies to consider "gender identity" and Caitlyn Jenner graces the cover of Vogue. Whether they want to or not, androgynous models can take on hero status in the LGBT community, as signifying and promoting the beauty in nonconventional expressions of gender. And while Sailors finds it "odd to see how upset some people seem to get [about] my wearing womenswear or not cutting my hair as short," this may be why.

Still, androgynous modeling may have a practical side. As Dove understands it, "Many fashion designers like their clothing to be the center of attention. When you have an ambiguous individual it often causes the viewer to pause at the image and study the model's whole body ... for indicators as to what this model is 'biologically'."

"By doing so," she explains, "they are by accident looking at every article of clothing with more detail than some might look at an image featuring a model with a more common aesthetic."

She notes androgynous models can also serve as a "flash bang gimmick" to lend mystique to a collection.

Gimmick or not, when Louis Vuitton put a famous boy in a skirt it brought a very timely high-fashion trend to the attention of the general public. Unsurprisingly, responses to the ad campaign have been mixed. Instagram comments include the likes of "I think that this is so noble," "what the f--k," "That dude will be a transgender in a couple of years," "Jaden pulled this off nicely with his whole outlook" and "Why Jaden WHY!!!!!!!!!!!!!!!"

On that last, very excited point, LV explains: Jaden Smith "represents a generation that has assimilated the codes of true freedom, one that is free of manifestos and questions about gender. Wearing a skirt comes as naturally to him as it would to a woman who, long ago, granted herself permission to wear a man's trench or a tuxedo."

Not sure about the "free of manifestos" part, but the rest rings pretty true. Maybe cross-gender modeling is ultimately less about gender than it is about liberation.

Editor's note: This article has been updated from the originally published version due to community feedback that some pronoun choices regarding model Andreja Pejic may have been insensitive.

Now That's Cool
In 1968, New York socialite Nan Kempner wore her Yves Saint Laurent tuxedo to society restaurant La Côte Basque. When the maître d' said she couldn't enter wearing pants, she took them off and walked inside in just the jacket.

Take That, Viagra! Sound Waves Can Help With Erectile Dysfunction 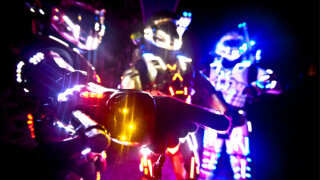 FW:Thinking Podcast: The Future of Fashion 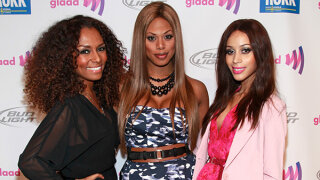 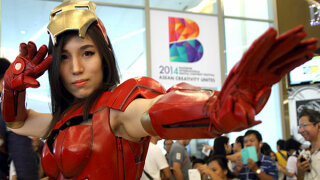