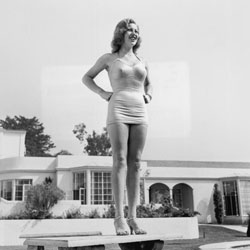 Here's where we started to see swimsuits that looked like swimsuits. The 1930s version was figure-hugging, made of swim-worthy fabric like latex, and left not only the arms completely bare but also the legs -- cut straight up to you-know-where.

By the early 1940s, the two-piece had arrived, but it was not the bikini-style two-piece. It was simply the 1930s one-piece cut in half above the belly button, showing a few inches of skin above the waist.

This belly-button distinction is important. It was the unveiling of the button (and below) that made what happened mid-decade so scandalous even French models were appalled …